The Carnegie showcases the gorgeous flights of imagination of a former Museum of Natural History director.

Andrey Avinoff was undoubtedly in possession of a scientific brain. The director of the Carnegie Museum of Natural History from 1926 to 1945, he was renowned for a body of research which focused on butterflies.

But as technical as Avinoff's thinking may have been while he was on the clock, when his creative side was unleashed, his imagination ran wild. "I bow to scientific fact until 5 o'clock," he stated. "After that, I may have other ideas." As a naturalist, he painted 350 depictions of flora (collected in Wildflowers of Western Pennsylvania and the Upper Ohio Basin) that systematically reproduced blossoms and leaves exactly as they appeared in nature. But as an artist, he explored the extraordinary, inventing new landscapes in his quest to fill the world with beauty, all in the belief that beauty is what will save it.

As seen in the Carnegie Museum of Art exhibit Andrey Avinoff: In Pursuit of Beauty, Avinoff's paintings burst with color and life, mixing Audubon and Bosch. The glorious "The Dispensation of the Old and the New," for example, was prompted by the flowers in a corsage worn by a debutante at her party. Avinoff asked to have them as inspiration and they were surrendered. What began as a watercolor of a Star of Bethlehem flourished into an astonishing triptych, presenting the magnificence of the organic in the forefront, while the hand of man, in the form of architecture ranging from skyscrapers to ruins, looms behind. Humanity's need to explain the natural is evident in the inclusion of a church and monastery.

Another work, "The Chrysalis: Passage of the Flight of Time," captures the cycle from birth to death, celebrating the exuberance of life while simultaneously warning of its fragility. Like all of Avinoff's works, it is executed in delicate, deliberate strokes, the hyperrealism of unreality.

Avinoff's own life took him from working as an adviser to the czar to fleeing Russia during the Revolution; from snow-covered mountains to tropical beaches; from a daytime life as a scholar devoted to the factual to the evening role of artist discovering the fantastic.

But on whatever road he trod, Avinoff's love of the beauty the world produced was evident. This exhibition stunningly reveals the beauty he generated himself. 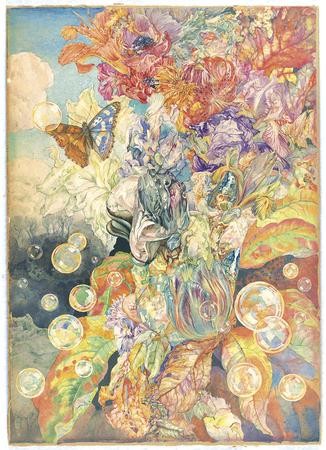