The Carnegie Science Center unveils Bodies ... The Exhibition ... but what are you seeing? | Features | Pittsburgh | Pittsburgh City Paper

The Carnegie Science Center unveils Bodies ... The Exhibition ... but what are you seeing?

On Sept. 6, the Carnegie Science Center held a press conference promoting its upcoming Bodies ... The Exhibition. The show, an internationally touring blockbuster, features some 15 human cadavers and hundreds of other body parts, all plasticized.

At the podium, Science Center director Joanna Haas alluded to "controversy, hyperbole and speculation" around the exhibit. Because the bodies are unclaimed corpses from China, for instance, critics have questioned how they were obtained. Standing a few feet from an irregular, furniture-sized object shrouded in a silky red cloth, Haas quickly moved to marginalize such concerns: "We know that some people have emotional and exaggerated responses to its content ..."

Then, making way for Roy Glover -- medical director for Premier Exhibitions, the for-profit company which produced Bodies -- Haas stepped to one end of the shrouded object, at the base of which were visible two metal uprights. After comments about how the exhibit promotes healthy living, Glover too stepped to the display.

Everyone knew what was underneath the cloth; we had all seen photos of these bodies, skinned and dissected, some arranged in sports poses. But Glover and Haas grasped the red cloth and, as though unveiling the '08 Mini Cooper, slipped the fabric from a flayed cadaver, all red muscle and white ligament, poised for an over-the-head soccer kick. The dead man trembled on his metal posts, as did the ball wired to his right foot.

With a gesture that says, "This human body is ours to display as we please," Bodies had arrived in Pittsburgh.

"We feel our body is our most precious possession," said Glover at the unveiling. "Why not understand more about it?"

Bodies officially opened Oct. 8, at the Science Center's UPMC Sportsworks. Nine sleek gallery spaces highlight various anatomical systems (skeletal, muscular, endocrine) and fetal development. Most of the parts are sealed inside transparent cases; one contains a full suit of human skin, rumpled, its occupant evicted. Most of the full bodies are out in the open, like museum statuary. The soccer man gleams dully, layers of red muscle cross-sectioned, white ligaments peeled back like those of a partially eaten turkey. Both eyes are fixed on the soccer ball, one naked in its orb, the other, lid intact, squinting in concentration.

Repeatedly, the text accompanying the displays directs our interest from the corpses we've come to see back to our own warm familiar frames. "Weak abdominal muscles can lead to injuries throughout the skeletal muscles," says a sign near the soccer man, adding, "So do your situps." A set of dirty lungs ("shrunken and darkened") are teamed with an admonition to quit smoking. The text alongside a severed hand -- peeled to reveal the palmar arches -- empathizes, "Even a small cut on a finger can be very messy."

The narcissistic imperative -- what can this dead person do for me? -- is consistent with the show's goal of making us healthier. "It's a look inside yourself you never thought possible before," said Glover on Sept. 6. Later, he added, "Why wouldn't you be engaged about yourself?"

It might seem unfair to call Bodies a "sideshow," as some critics have done. Yet claims about education seem tenuous. Medical students might require real corpses, but it's hard to imagine a lay person distinguishing actual dead flesh from a professionally cast or sculpted model. As to healthy living, who hasn't heard that you ought to quit smoking, lay off the Twinkies and take a walk now and again? Smokers hardly keep puffing for lack of information.

And if Bodies doesn't seem as crass as a carnival sideshow, perhaps you should imagine some sawdust on the Sportsworks' respectable floor. This is show biz.

There's a build: The first room has a full skeleton, a spinal column, a knee joint; your first flayed corpse is in room 2 ("Nervous"). Well-lit rooms give way to darkened chambers, the better to witness the real arteries of a real leg glowing red in a case, spot-lit from above.

Science and stagecraft have a long partnership: Scholars, after all, desire an audience, and sideshows crave legitimacy. In 1906, for the edification of patrons, the Brooklyn Zoo exhibited a Central African Batwa man named Ota Benga in its Monkey House. The corpses or skeletons of sideshow freaks were often preserved for traveling exhibition.

Bodies includes appropriate scientific trappings, including specimen numbers ("Associated Heart and Lungs: 2005.374"). But the ominously darkened room containing bottled fetuses is posted with a warning that visitors who might find it upsetting can bypass this exhibit -- a subtle promise of a hair-raising experience ("See it if you dare!") that might have warmed the heart of P.T. Barnum. Barnum likewise would have appreciated the showmanship of setting those asphalt-colored smoker's lungs alongside a transparent box with a sign urging sinners to deposit their final pack now.

Continue, please, past the sign reading "The specimens in this Exhibition have been treated with the dignity and respect they so richly deserve." In the final gallery, under glass, is a body sliced like salami, in transverse sections, and laid on its back. The laminated discs are spaced so that the specimen is a virtual 12-foot giant, captured for your perusal.

Premier Exhibition's Roy Glover (an anatomy professor) might rhapsodize about "the dynamics and beauty of the muscle system." But what do we really learn from this verse of "I Sing the Body Mummified in Polymer"? Can't you discover the glory of the human body at the ballet? At a track meet? Out in the sunlight, watching your hand unfold? Is it any less glorious sheathed in skin?

Critics of Bodies and similar shows constitute a minority. The Science Center estimates that more than 300,000 visitors will see Bodies before it closes, in May, and has busily cultivated word of mouth. Four days before Bodies officially opened, dozens of comments already in a guest book were unanimously positive, even rapturous. "After seeing this exhibit I can fully appreciate God as the ultimate Creator," wrote one. Other supporters include the Catholic Diocese of Pittsburgh, which issued a statement lauding "an extraordinary visual presentation of the dignity and miracle of creation."

Another enthusiast is David Hillenbrand, president and CEO of the Carnegie Museums of Pittsburgh (which includes the Science Center). Hillenbrand's op-ed in the Sept. 9 Pittsburgh Post-Gazette enshrined Bodies in the same "controversial and compelling" category as Andy Warhol Museum exhibits on lynching and Nazi eugenics. The comparison seems oblivious to the distinction between exploring an injustice and possibly perpetrating one.

We know virtually nothing about these people -- these "specimens." China, where Atlanta-based Premier Exhibitions gets its corpses, has long been known for jailing, torturing and executing dissidents; Chinese officials have acknowledged illegal trafficking in human organs and dead bodies. The country also leads the world in the small but lucrative industry of body plastination, supplying shows by Premier and other exhibitors.

China's human-rights record is terrifying. But let's accept Glover's promise that "[e]very possible step has been taken to assure that the bodies were obtained legally." The trouble is, the morality of Bodies isn't just about manner of death or means of acquisition. One day, someone in China dropped dead: No one knew, or cared, to claim his body, so Premier got it. And that's the best-case scenario: mummification for display without consent. The exhibit seems less about the risks of smoking than about the perils of being poor in China.

If someone's land were confiscated, we would bellow. But the people who became Bodies specimens surely owned little more than their own hides. Although impoverished in life, in death they'll make millions -- for someone else. Last year, Bodies and a similar show earned the publicly held Premier $21.6 million.

At the Science Center, Bodies tickets for adults are $22, a sum it probably took these "specimens" two weeks to earn. In the show's last gallery -- just before you exit right into a gift shop largely given over to Bodies merchandise -- there's a sign. It reads, "To see is to know." 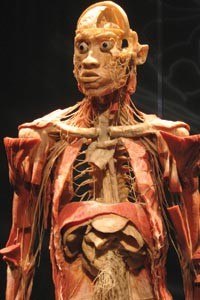 Inside man: One of the corpses in Bodies ... The Exhibition.