The Carnegie looks at the built landscape of postwar Pittsburgh

On urban renewal, Imagining the Modern is a bit too evenhanded

The curators might have called this exhibition “Representing the Modern,” for the many images and materials through which Pittsburgh’s post-World War II architecture and planning are illustrated. Similarly, it might have been “Constructing the Modern,” for the familiar double meaning that we construct ideas as much as the buildings themselves. But this show at the Carnegie Museum of Art’s Heinz Architectural Center is titled Imagining the Modern. Place yourself at the beginning of this era, it seems to ask, when these buildings were new ideas or recently completed projects. Abandon your preconceptions and look afresh.

The title could also just as easily have been “Modernism? What were they thinking?” Certainly, the vogue for the breezy and unencumbered architecture and design of the Mad Men era, at least in smaller-scale works, has outlasted the long-running TV show. In fact, the Carnegie currently offers four simultaneous exhibits celebrating modern subjects, and it schedules accompanying events and promotions with overt Mad Men themes. On the other hand, postwar Pittsburgh, to say nothing of the rest of the nation, was the era of Urban Renewal. From the Civic Arena, in the Lower Hill, to Allegheny Center, on the North Side, to Penn Circle Towers, in East Liberty, the major architectural projects were frequently over-scaled destroyers of traditional neighborhoods. They continue to be controversial and often difficult or impossible to love amid their troubled persistence or contentious removal. 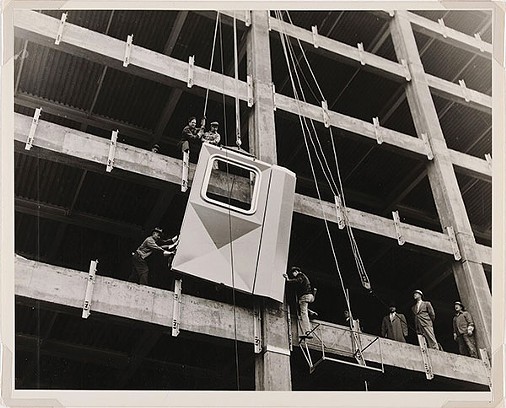 The curators of this show are four principals from the Boston-based firm over, under, which has its own gallery space and has put on dozens of exhibitions. Two of its principals, Rami el Samahy and Mark Pasnik, have spent months or years in residence in Pittsburgh teaching in the School of Architecture at Carnegie Mellon University. Pasnik, along with the other two principals, Mark Kubo and Chris Grimley, has researched the Boston architecture of this era (don’t call it Brutalist) and written a book entitled, with intentional irony, Heroic.

So this group is well suited to a rigorously researched and intellectually charged engagement of the subject. They navigate the challenges of postwar Pittsburgh through a few notable strategies. They use an enormous amount of material. A section on the era’s photography could be an entire exhibition on its own. In addition to placing some rare period brochures of architecture and planning on display, they use a genuine profusion of reproductions and sometimes real, perusable editions, of daily newspapers and professional journals as explanatory material. Visitors can immerse themselves in the clash between the exuberant design professions and the skeptical, even angry daily press. The downside is that the curators have chosen as part of their intellectual stance not to comment directly on the shortcomings or errors of the era’s architectural work. “There isn’t really an explicit point of view present,” said Grimley, in a lecture introducing the exhibit.

In the case of the Hill District, it is quite clear that the clearing of the neighborhood for Urban Renewal projects was a stunning social injustice. Photographs and articles showing protests of the day say so clearly.

The case of Allegheny Center Mall is not so clear. The gargantuan structure resulted from the similarly notorious destruction of a traditional neighborhood. But unlike the recently destroyed Civic Arena, it remains after decades of ghostly underutilization. It is now the subject of some gentle redesign as part of its renovation into the Nova Center.

To the great credit of Imagining the Modern and the ongoing HACLab program that aims to make the architectural galleries more accessible and interactive, the exhibit’s largest space became a genuine architecture studio, with el Samahy’s Carnegie Mellon students proposing redesigns of Allegheny Center. Though their semester is now over, their drawings and models are on the walls right next to works by major practitioners including Frank Lloyd Wright and Mitchell and Ritchey. Ongoing videos show the students presenting their work and explaining their investigations and design intentions.

The in-house studio is an admirable and instructive display of how architects think and produce their work. In much the same way, the profusion of archival materials and information rewards people who revisit the exhibit and examine it in depth.

Yet it would be suitable for the curators to deliver certain messages in this exhibit with more directness, rather than leaving visitors to do so.

The gigantic scale, univalent uses and unresponsive processes of many of these projects led to urban disasters whose effects we are still struggling to correct. We don’t yet know whether our corrections of those obvious missteps will be enough to fix previous errors, or if the problems are more deeply seated in attitudes and practices that we perpetuate to this day.