Her landscape-inspired sculptures intrigue, but the better works reach out, rather than in. 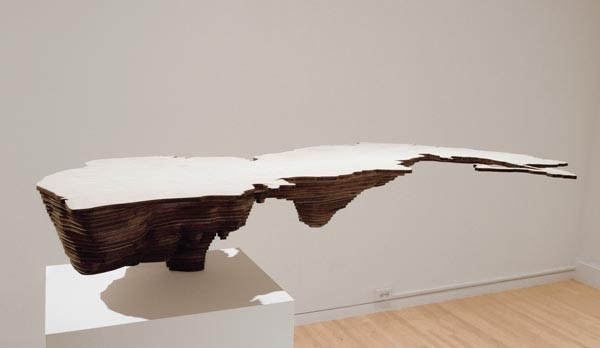 I have always loved the shape of the Ohio River. Not so much the water, riverbanks or topography, mind you; I actually just loved the maps. I grew up in Marietta, Ohio, and I delighted in how my town occupies a pronounced, oversized oxbow in the river's course. The otherwise overlooked hamlet is easily identifiable on even large-scale maps, as long as the river is included.

Imagine my delight when I found out Maya Lin would be creating a new work, "Ohio (Allegheny & Monongahela)," as part of her Pin River series, especially for her show at the Carnegie Museum of Art's Heinz Architectural Center. My fetish for maps of Ohio would be gratified yet again, in the work of — one can say without exaggeration — an epoch-making artist.

Lin's earliest career as a Yale undergraduate who skyrocketed to fame with an iconoclastic proposal for the Vietnam Veterans Memorial is familiar, but worth retelling with fresh perspective. "I didn't insert a memorial into the earth," she said in the most memorable line of her recent lecture here. "I made it by cutting into the earth and polishing it." That's part of why that work was so prescient and is so outstanding. As any visitor who becomes immersed in it knows, one ends up thinking as much about burial as about stone, more about the earth than the object.

That's why the Pin River piece is a bit disappointing: It seems to be more about the object than the earth. In this piece, as in others in the series, the river is abstracted and transformed. The background is a white plaster wall applied temporarily to the galleries' yellow plaster and canvas. The paths of the Ohio and its two major tributaries become "a drawing in pins," according to curator Ray Ryan's accompanying text. These elements are tightly and regularly spaced inch-and-a-half metal spikes.

Lin's signature elegance is apparent, certainly, in the way the precise machinery of nails contrasts with the delicate filigree of shadows that hangs from the work. Perhaps indicatively, though, her hometown of Athens, Ohio, is too far inland for inclusion. She certainly shouldn't be sentimental, but the better works in this show reach out, rather than in.

"Caspian Sea (Bodies of Water series)," for example, is a favorite. A map of the sea made three-dimensional, it is a layering of sheets of birch plywood, which expresses the volume and depth of the water the way an ice cube takes the shape of its tray, but with a welcome topographical complexity. Even lumpy contour maps almost invariably depict water as flat, but here fluid finally acquires depth — both conceptually and literally. Viewers can imagine the complex land masses of the surrounding topography, which the basin compellingly suggests. Alternately, they can just revel in the otherworldly upside-down mountains that cantilever adventurously from their dainty little pedestal into the more precarious space surrounding. It's a more complex intellectual game that encourages you to contemplate the relationships between land and water — relationships that extend beyond the boundaries of the model itself.

The expanding reach into the landscape is satisfying, but the focused attention to the individual can be, too. In the Vietnam memorial, that meant including 58,000-plus names. In these days of databases and laser printers, we can easily forget that listing the name of each American casualty on the memorial necessitated experimentation with database software and photo-etching, since traditional hand-carving of names became technically untenable.

So I look at Lin's recent global project, What Is Missing, with great interest. The project records lost natural phenomena, whether species or landscapes, by gathering personal and institutional accounts from willing participants. (Please add your own at whatismissing.net.) These are presented through a slightly complex user interface. Dots are color-coded by reference to past, present and future on a global map; users can zoom in to study specific memories, phenomena or plans. Notably, considering her audience, Lin's Pittsburgh lecture emphasized this project, and its innovative technique for harnessing memory and enhancing environmental conscientiousness.

Lin's approach here exactly inverts the method of the Pin River series, and solves certain of its major shortcomings (while also displaying a remarkable global scope). If the Pin River pieces start to seem concise and elegant by comparison, then Lin's work overall comes into clearer perspective. Her work is less an issue of quality from one piece to the next, than of how sprawling issues of art, environment and the individual play out in the hands of an artist who invariably makes provocative work ... and who, every once in a while, changes the world.