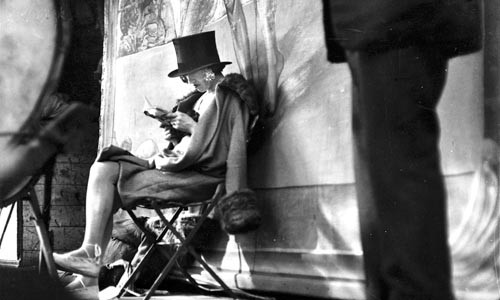 There is a lot of beauty to be found in On Reading, a traveling exhibition created by the Museum of Contemporary Photography in Chicago, now at the Carnegie Museum of Art. The exhibit spans more than 60 years of work by André Kertész, during which he was frequently drawn to photograph people reading: in schools and at work, in gardens and parks, on an arched wall over a Venetian canal, sitting on a train in Japan, in a Trappist cloister in France. Fifteen of the 100 pictures in the exhibit depict people reading on balconies and rooftops.

Kertész, one of the 20th century's great photographers, was a pioneer of street photography with the handheld camera who intuitively understood that photographs could be at once descriptive documents and expressive statements. Self-taught, he had an instinctive sensitivity to gesture and light and a fascination with the everyday. A native of Hungary, Kertész moved to Paris as a young man and later to New York. Many of the pictures in On Reading were made in these places.

Kertész poetically explored both the ways that people experience modernity and the possibility of human moments in cities, describing a world that is in part as he found it and in part as he wished it to be. Each observation of a person absorbed in reading in public seems to affirm that while cities can feel lonely, they can also be kind. The moments may be drawn out -- reading is usually a very still activity -- but the photographer's perception is precise and confident as he places each figure in stable geometries of light and architecture that almost invariably describe calm.

Rough groupings move the visitor through the space, but the absence of any tight structure suggests the equivalence of the moments described. Cozy reading areas throughout the exhibition space invite visitors to sit and reflect on leather couches, and the pictures are hung low and accessible on warm brown walls.

The poignant image that closes the show is the only one given pride of place: Kertész, lying on a bed, has photographed his own legs and feet, books visible on a shelf across the room. This picture expresses how photography completely imbued his apprehension of the world. "Each time André Kertész's shutter clicks," wrote Henri Cartier-Bresson, "I hear his heart beating."

The text accompanying the exhibit invokes nostalgia, suggesting that print will soon be a thing of the past, and so too reading books. Looking at pictures that are at least 40 years old, there is certainly a sense that time has passed. Many of them originally appeared in the 1971 book of the same name, republished in a new edition in 2008.

That On Reading comprises pictures derived from a book of photographs of people reading books reminds us that literacy can and should encompass many media. It's evident that Kertész saw reading as instrumental to the social changes that he himself witnessed. In the 20th century, a middle class emerged with access to affordable books, higher literacy rates and leisure time. They enjoyed the golden age of weekly magazines, including those where Kertész began his career. These were not phenomena that one could be nostalgic about in the mid-20th century; to photograph someone reading a novel at leisure on a New York rooftop was perhaps a kind of celebration.

Were Kertész still with us, would he not be curious about technological changes and the possibilities that they hold? Yes, these pictures describe a different era, but they were made to look forward, not backward, and it would be a shame if Kertész's achievements were suppressed by nostalgia. To photograph the act of reading was not, for Kertész, an end in itself, but the means through which he accessed the humanity that flourished around him, that he could not ignore.