"I feel like that woman is staring at me."

We may have strayed slightly outside of our natural milieu when we entered the wine-dark, clubby confines of The Capital Grille, but it seemed unlikely that the fine folks at the neighboring tables were actually staring at us. Angelique was talking about a rather severe-looking woman -- Nellie Bly, as it turns out -- peering out from one of the oil paintings that line the dining-room walls. Nellie and her fellow portraits are interspersed with hunt scenes and mounted big game (the buffalo in the bar is low enough that you can pat his shaggy mane). Combined with the mahogany paneling and heavy crown moldings, the effect is part portrait gallery and part hunt club, piling on the pedigreed associations of each. It's a far cry from the Lazarus department store perfume counters that occupied this space just a few years ago.

The Capital Grille staff plays up the VIP treatment, calling you by name. Even if you haven't made, and don't require, reservations, they will take your name and make sure that everyone -- right down to the server's assistant -- is able to use it. The evident hope is that you will become one of the regulars with a locker (for private bottle storage, not gym clothes) in the lobby.

Averting our gazes from the penetrating stares of Ms. Bly, Mr. Rogers and a veritable herd of thoroughbred horses, we turned to the menu with its juicy promises of steaks, chops and seafood. (Vegetarians, take note: This is a steak-lover's steakhouse, and you will have to cobble together a meal from the salads and sides.) Preparations were sophisticated but straightforward, with only the simplest of tricks up the chef's sleeve.

For instance, crab cakes abound on the menus of Pittsburgh, so how to make this dish stand out? Why not add lobster? Instead of lump crab with bread and vegetable filler, here we have lump lobster combined with shredded crab for supple, luxurious cakes. They were pan-fried on only one side, which kept the meat moist and tender, with just a little loss of cohesion. A bright, vinegary roasted vegetable relish featuring corn cut directly from the cob jump-started Angelique's taste for summer.

Spinach salad with warm bacon dressing was thoughtfully served on two plates for us to share. This substantial salad, with plenty of mushrooms, meaty smoked bacon and tender boiled egg, avoided the greasiness that can make this dish too heavy, though an excess of dressing did make it too wet.

From our server, we received a well-informed, well-rehearsed run-down of the entrée options, including the cuts of meat available that day -- the kitchen employs its own butcher -- and the length of time each had been dry-aging in house. Angelique ordered Kona-crusted dry-aged sirloin with caramelized shallot butter, a Chef's Suggestion that merits being a signature dish. A steak as thick as a Russian novel had ground Hawaiian coffee rubbed onto and into the meat, creating a delicately crunchy black crust and adding the intense flavor profile of coffee beans without making the steak taste like breakfast. The cut was called Kansas City, which here means a New York strip with the bone still attached, increasing moistness and tenderness. Although this cut isn't on the menu, it was offered by our server like a daily catch.

Jason ordered the veal chop, primarily for its Roquefort butter sauce. While the chop was perfectly cooked and tender, without the mushiness that can mar veal, it featured only an occasional, fleeting taste of sharpness; the distinctive bleu cheese notes he'd been looking for were mostly absent. Perhaps the kitchen doesn't want to overwhelm mild veal with stinky cheese, but if they're going to offer it, we think bolder would be better.

We ordered just one dish from the a la carte side menu: lobster campanelle and cheese. Instead of being gooey and cheesy, this dish featured a more delicate cream sauce with grace notes of mascarpone, havarti and grana padano cheeses, all baked beneath panko and grated white cheddar. Jason found this approach rather ordinary, but Angelique thought the restrained sauce was just right for the al dente pasta and decadent chunks of lobster.

The Capital Grille's desserts are made in-house, and many featured berries just coming into season. Angelique's dish of berries in crème Anglaise was simple and simply wonderful. Jason generally dislikes fruit with his cheesecake, but he had a feeling that this would be different, and it was. An individual round of substantial but light and fluffy cake was perfectly paired with a pool of brightly flavored berry coulis and a generous serving of those ripe, fresh berries.

Among Pittsburgh's steakhouses, Capital Grille stands out primarily for its service, which is personalized, expert and attentive. The food is excellent, too, which it should be at these prices. In fact, we're not sure which receives more thoughtful consideration: the diners, or the steaks on which they dine. 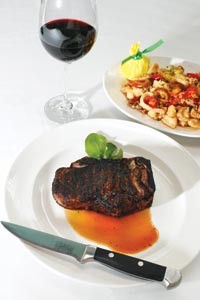