The Cactus Blossoms’ fresh sound is planted in classic country

“People might not believe it, but we’re really not nostalgic.”

You don’t have to listen to The Cactus Blossoms for very long to begin feeling nostalgic. Their sound is inspired by mid-20th-century country-and-western artists like Hank Williams, and the words such as “classic” and “traditional” are thrown around pretty liberally.

But to classify the music of brothers Jack Torrey and Page Burkum that way would be a mistake. It’s obvious where their influences come from, but the Minneapolis-based Cactus Blossoms aren’t a nostalgia act. That comes through pretty clearly on their new album You’re Dreaming, on Red House Records.

“We found this sound, this music through our own exploration,” Burkum says. “People might not believe it, but we’re not nostalgic. To us, this is just our music.”

The brothers formed the band in 2009 after Torrey spent some time performing solo in clubs around the area. “I did mostly folk stuff. Then every so often, I’d slip in something I wrote but say that someone else wrote it, because I didn’t want any feedback,” Torry says. But he adds that performing scared him at the time, so he asked his brother to get on stage with him  to do “drunken party blues,” along with selections from Hank Williams and the Louvin Brothers. 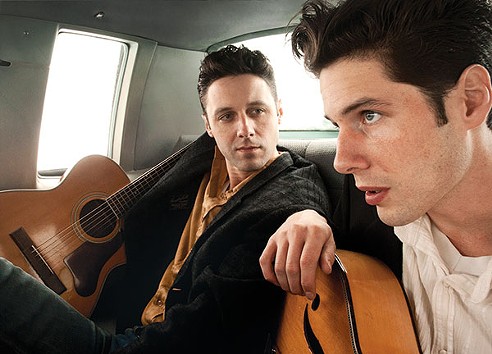 From there, they began a weekly residence at Minneapolis’ famed Turf Club and began developing their own sound. And comparisons can be drawn to acts like the Everly Brothers, their sound comes off as fresh and modern. The key to the brothers’ soulful twang are the gut-wrenching harmonies that seem to only come from sibling acts, such as the Louvins, the Everlys or even the Oliver sisters, from Sweethearts of the Rodeo. But, the brothers say, there was never any intention to sound like the Everlys or anyone else.

“I think just because we’re two brothers who sing harmonies, that people automatically liken us to the Everly Brothers,” says Torrey. “There really is so much more going on. We don’t listen to the Everly Brothers a lot. I love them, but we weren’t really into them when we learned to play the guitar and sing. But we found our way to this point through our own exploration, which it seems is lining up in the realm of what they were doing. Which is interesting, and I don’t really know how to explain it.

“But I think Bruno Mars is trying to be more like Michael Jackson than we’re trying to be like the Everly Brothers. I think it’s just something that’s interesting to try to pull apart and look at.”

Adds Burkam: “Yeah, it’s definitely less intentional then it might seem. But no matter what we do, I think it could be compared to something like that just because it’s the unique sound that brothers, or any duet singing harmonies, can get. I would never say that I don’t understand that comparison, but it is unintentional.”

Last year was an important one for the brothers. In January, they were nominated for Best Honky Tonk Band in the Dale Watson-founded Ameripolitan Music Awards (losing to The Derailers) and signed their first artist contract with Red House Records, one of the premiere labels for roots/indie-country music. They had recorded and self-released two previous records: a self-titled debut and one recorded live at the Turf Club.

Torrey says the first album was really rushed: songs written the week before were recorded in about 10 hours. Making the new record was a completely different process. You’re Dreaming was recorded over a six-month period spent travelling between Minneapolis and Chicago.

It wasn’t the ideal situation, the brothers say, but it was necessary. They recorded the record live with a full band in Chicago, with artist and producer JD McPherson — who the duo met while touring with him —so getting schedules to match up took some work. But, the brothers say it was worth it.

“This record comes from a whole lot of people recording together in one room,” Torrey says. “When I sing, and this goes for my brother as well, I’m usually strumming a guitar and I wanted to be able to do that. I want to have the band with me so we’re all reacting to each other. That’s how music works in my world.”

Burkum says having all the players in one room allows each musician to “affect” the others. “If they’re hearing us playing or singing a certain way, they can react to that,” Burkum says.

The new record contains 10 originals and one cover (“No More Crying the Blues,” by Sun recording artists Alton and Jimmy). Included on the disc are a handful of songs the brothers recorded on their original albums, including “Stoplight Kisses,” Traveler’s Paradise,” Ádios Maria” and “Change Your Ways or Die.”

“That original process was so rushed and we’d never played with a band before, so this was a chance for us to make some of those songs final,” Torrey says. “We played the songs a thousand times after we recorded them and you sometimes you’d think, ‘Man, I wish we could record that song again.’”

Producer McPherson also had a hand in bringing back some of the earlier tunes. “JD was not going to let ‘Stoplight Kisses’ go,” says Torrey. “He was that way with a lot of those songs. I think he thought, ‘I know where they were headed with this and I want to help make it happen.’”

Including the older tunes also gives the record a transitional feel. A lot of the earlier tunes were lighter and bouncier and are the source for the nostalgic feelings you get when hearing this band. But the duo’s newer songs have evolved, with more complex lyrics and harmonies. With songs like “Mississippi,” “If I Can’t Win” and “You’re Dreaming,” the first reaction isn’t nostalgia, but simply “That’s a great song.”

Says Torrey: “I wrote songs like ‘Stoplight Kisses’ years ago and it’s quite a bit different from something like “Mississippi,” which is more representative of where we’re heading as a band.”