There's no question the show's been mangled by too many hands. 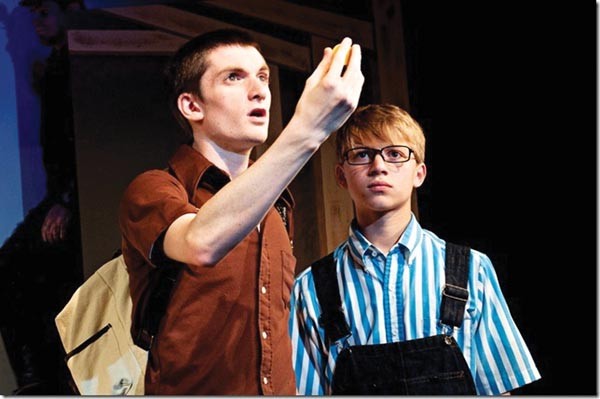 Lloyd Richards, among other things August Wilson's favorite director, said: "It's amazing how few people know how to write a play ... and how many know how to rewrite one." My heart breaks for any writer going through "new play development."

The program for The Burnt Park Boys — a musical receiving its local premiere from The Bald Theatre Company — includes a list of theaters which have developed this show. Though Bald Theatre is contractually bound to run the list, it's not necessary: There's no question the show's been mangled by too many hands.

The book's by Mariana Elder, lyrics are from Nathan Tysen, and Chris Miller supplies the score to this tale of West Virginia boys whose fathers were killed in a mining disaster. The protagonists make life-changing choices when the company decides to reopen the mine.

That's the idea, now rendered all but unrecognizable by — I'm assuming — the host of suggestions from the directors, dramaturges, actors, designers and techies involved in early productions who knew how to "fix" the show. And Elder, Tysen and Miller didn't say no to any of them. Because if they had, that company could have dropped the show.

And so we have a rootin', tootin' comedy suddenly shoved aside for scenes of painful heartbreak. The early teen characters are goofy sit-com kids, until they become adult mouthpieces for the writers. The play's focus is on one young man, but later it transmutes into someone else's journey.

Unconnected fantasy characters make an appearance, and a scarcely credible subplot about explosives battles the show's Heidi Goes Appalachian sincerity. And even with all of that, nothing much happens for most of its 90 minutes, except an ending so ludicrous it could have been thought up only by a dramaturge.

John-Michael Breen, as Pete, carries the weight of the entire show on his shoulders; Bald Theatre is blessed to have found someone who can do what he needs to do with such amazing talent. Logan Williams, Joseph Serafini, Amanda Hawkins and, especially, Matt Augustyniak contribute strongly in supporting roles.