The spy thriller gets a spin-off, but despite a good cast, fails to engage 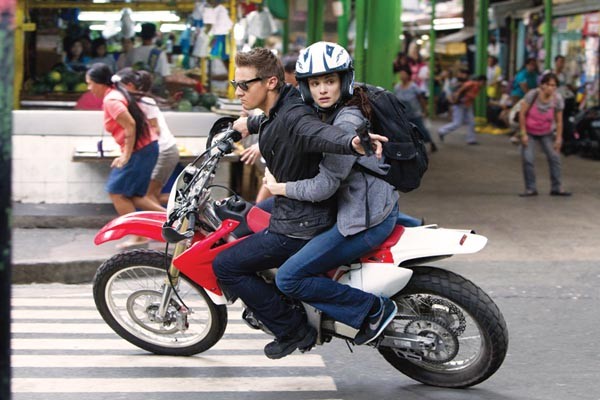 Tony Gilroy's thriller is kind of a spin-off of the earlier Bourne trilogy. The Jason Bourne  character is still of concern to those in the shadowy world of the U.S. government who know of him, but now the man on the run is Aaron Cross (Jeremy Renner). It takes a while to piece together Cross' story: The first hour of Legacy intercuts between Cross solo-trekking in Alaska, a workplace shooting at a medical lab and the offices of various governmental agencies, where black-ops guys rattle off acronyms, code names and worries.

Turns out Cross is part of a really, really secret CIA program that has been creating bio-chemically juiced-up super-agents and that has to be shut down immediately. But Cross figures out that he's about to be killed by his boss (Ed Norton), and using his still-juiced-up skills, he escapes to the Philippines with the program's non-complicit doctor (Rachel Weisz). Once in Manila, Cross is pursued by the CIA's even more-secret, more-juiced-up outsourced Thai agent. (If you're asking, "How deep do these black-ops programs go?" the answer is, as far as the ridiculous plot needs them to.)

The earlier Bourne films were well-produced action films, with a smattering of intriguing backstory as the titular spy struggled with his job and conscience. And while Renner is a fine actor, the script here doesn't give him any moral dilemmas, or even a coherent history. He's just an anxious pill-popper trying to score his juicing meds before the feds kill him. The underlying dramas at the CIA and related agencies are equally thin and confusing, trying to bridge formerly wrapped-up aspects of the trilogy while setting up new institutional villains for our hero to escape from.

And it's all a bit of a yawn. For the first 90 minutes, there's very little action.  Once in Manila, we get a rooftop chase (seen it!) and a high-speed motorcycle chase (ditto). Maybe it all makes sense in Part 2, because it's pretty obviously from Legacy's abrupt ending that your ticket buys only Part 1.