The Book of Mormon

What's surprising about Mormon is just how negligible the script is — but that's not a criticism. 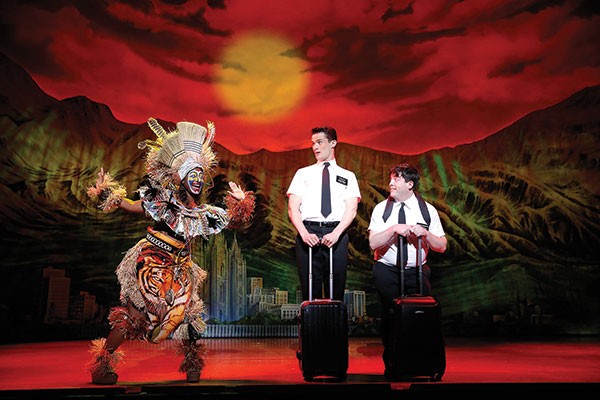 THE BOOK OF MORMON

When The Book of Mormon opened on Broadway, in 2011, it was greeted with accolades that would have made Jesus blush ... or should that be the Angel Moroni? Winning nine Tonys, Mormon was hailed as the reboot of the American musical; since it was from the South Park guys, people who don't usually go to musicals (i.e., straight men) would go to this.

The credits list the book, music and lyrics by Trey Parker, Robert Lopez and Matt Stone. Lopez wrote the Tony-winning score to Avenue Q. Parker is listed as co-director with Casey Nicholaw, who supplies the choreography. A touring version is here as part of PNC Broadway Across America.

In the beginning ... we meet Elder Price, a young Mormon whose optimism matches his naiveté. For his mandatory missionary work, he's hoping to be sent to Orlando ... but gets Uganda. Worse, he's paired with Elder Cunningham, a nebbishy, nerdy, needy nobody.

But the Mormon church has done nothing to prepare them for life in this small Ugandan village. AIDS has infected 80 percent of the people, and a warlord is demanding the clitoral mutilation of the women.

You can write the rest of the plot yourself. They fail to convert any villagers, their friendship ends in acrimony ... and the second act brings redemption and rebirth.

What's surprising about Mormon is just how negligible the script is; it's really a series of big numbers with just enough words to get from one to the next. That's not a criticism, but since it is Parker and Stone I was expecting a lot more in the way of jokey dialogue scenes.

But be assured those numbers are funny, a lot of which has to do with Nicholaw's choreography. I'm not much of a dance fan, but he manages to shove as many jokes into the movement as the writers do into the lyrics. Fully 50 percent of the fun of Mormon is Nicholaw's doing.

And, um, about those lyrics ... I mention this only because several people have asked. The language is rough. And I don't mean off-color schoolboy stuff. I mean that one of the lyrics is "Fuck you, God! In the cunt!" If such language (and there's a lot of it) bothers you, you'd probably best avoid this show.

In a number of supporting roles, Grey Henson proves to be an old-fashioned song-and-dance man, and it's left to Kevin Mambo, as Mafala Hatimbi, to be the show's only nod to sincerity, and he's quietly touching.