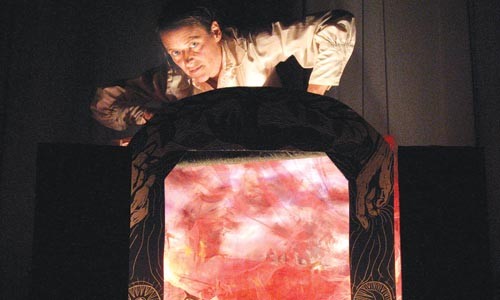 Long before Avenue Q debuted on Broadway and opened the eyes of millions, or at least a lot, of theater-goers, plenty of vanguard artists, writers and performers already knew puppets were bad-ass. Instead of yapping through uniformly turned-out mouthpieces in swanky Great White Way joints, they utilized hand-crafted instruments, household items, found objects and trash, bringing it to black-box spaces, dirty warehouses, outdoor amphitheaters and even former-brewery squats-turned-reclaimed-artist-quarters.

That last listed would be the Brew House, which for 10 years has hosted the glory known as the Black Sheep Puppet Festival. The festival began as a small entry into the vast world of international puppetry festivals and, largely on the strength of volunteer labor, has grown to superhuman proportions. It now claims to be the country's oldest annual puppet festival, and it's survived the departure (for grad school) of founding organizer Tom Sarver, who remains as artistic director, while managing-director duties fall to longtime volunteer Mike Cuccaro.

In Black Sheep's 10th go-round, climaxing with the big performance weekend Oct. 24-26, everything you've ever wanted to know about puppets but were afraid to ask is up for grabs. Favorites from previous seasons return; new blood debuts; programs for kids of all ages continue; material for legal adults takes the stage; everyone takes to the streets; and the opportunity for hands-on (hands-in? hands-up?) puppet contact unfolds.

Beth Nixon, a seven-time Black Sheep performer based in Philadelphia, not only performs but offers workshops too, for those who've harbored the desire to build "giant pole puppets" but lacked the opportunity. (Note: Christmas looms. Handmade gifts are best.) Nixon's expertise will be shared at the Brew House through Thu., Oct. 23.

The first of the weekend's performance showcases immediately follows. Featured performers include Nixon, Flora Shepherd, Fuzzy Boundary Productions, and the internationally known Amy Trompetter. Shepherd hails from a puppeteering family and has been practicing the craft since age 4; her "The Cubicle" is staged with discarded office supplies. The Fuzzy Boundary collaboration -- artist Cheryl Capezzuti and Pittsburgh theater luminary Kellee Van Aken -- has been together almost as long as Black Sheep itself and has reformed our perceptions of dryer lint; Capezutti also collaborates in the Things That Stick troupe, whose "Shoe" features 10-foot-tall rabbits. Amy Trompetter is the mother of the Wobbly Bucket Brigade, whose manifesto includes the instruction to "Celebrate the resistance of the past that are our hopes for the future!" and which dramatizes chapters from Howard Zinn's A People's History of the United States.

Saturday brings a workshop, after which you'll take home your very own Neoprene puppet head; a lecture by Gregory Knipling; and a family-friendly matinee featuring Heit, DreamWeaver Productions and Fare Feather Family. The evening performance is a reprise of Friday's, while the Sunday matinee features Another Bloomin' Puppet Company (from Indiana, Pa.) and Shepherd.

This is but a summary. Whether for kiddie amusement or adult education, a fist in the air has never been so entertaining.

The Black Sheep Puppet Festival continues through Sun., Oct. 26. Most events at the Brew House, 2100 Mary St., South Side. Many events are free; main performance showcases are $15. 412-394-3353 or www.blacksheeppuppet.com