The Black Panthers: Vanguard of the Revolution 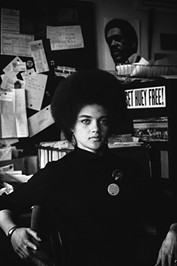 It’s a smart move to open this new documentary about the Black Panthers by having one participant recount the fable of the blind men and the elephant. Just as each man drew a different conclusion depending on which part of the animal he touched, so too, says the interviewee, did each Black Panther have a different experience. It’s a given for such a sprawling organization, one that had many focuses and varying degrees of participation: Some members were imprisoned, others went to rallies; some joined to foster black pride, others to foment a violent overthrow. And it helps inoculate the film against charges that it is not comprehensive, or missed this aspect or that.

Because even at two hours, Stanley Nelson Jr.’s The Black Panthers: Vanguard of the Revolution functions mostly as a primer, an introduction to who, what and why the Black Panthers were. The structure is linear, beginning with the Panthers’ founding in Oakland, Calif., and moving through significant events such as the gun showdown in Sacramento, the arrest of Huey Newton, the departure of Eldridge Cleaver, the death of Fred Hampton, and the police raid on the Los Angeles office. Nelson conducts contemporary interviews with former Panthers, historians, law enforcement and assorted supporters and colleagues. And there is ample use of archival footage.

That’s a lot of basic ground to cover, but Nelson also attempts to sort out what the larger social, political and cultural impacts were — for the country and for individuals. There is also an examination of how even powerful movements can get derailed, and from both external and internal forces. The story of the Panthers is a complex, fascinating one, touching on so many aspects  — domestic revolution, gun control, the role of women in political movements, the tensions between violent and nonviolent protests, the overreach of the police, influence on other protest movements, and so on. For those who might know about the Panthers only from a stylish photo or two, this is a good place to start.