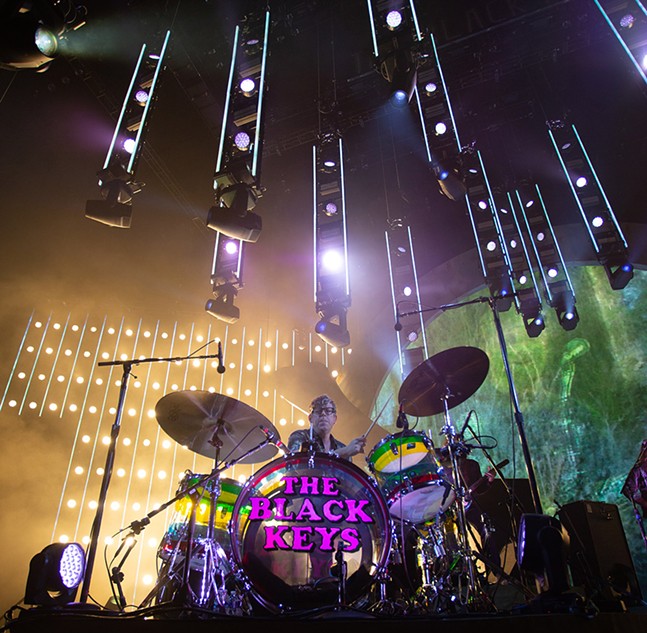 As a younger fan, it was my first timing seeing the blues-rock band live. Since the members have been playing together for around 21 years, many of The Black Keys listeners who I talked to before the show had already seen the band perform in the past. So I wasn't shocked when the band ran onto a simple stage set, featuring only their instruments in front of a plain curtain backdrop and "The Black Keys" illuminated by bulb lights; I was just disappointed.

CP photo: Andrew Stein
The Keys newest album, Let's Rock — the band's first release in five years and what the tour's promoting — is a step back to old-school rock and roll. Previous albums have been tinged with filters and effects, seen most in singer Dan Auerbach's echo-y vocals, but in Let's Rock, his voice is clear, sung overtop of uncomplicated bass, drums, and snares. I assumed the straightforward setup was an ode to small intimate rock shows; it didn't feel like I was in PPG Paints Arena.

Veteran Black Keys fans screamed as the band opened with "I Got Mine," off of the 2008 Attack & Release before making way for "Eagle Birds," the second track off the Let's Rock. Next was "Tell Me Lies," also from the new album. While the Akron, Ohio-native band played, trippy visuals projected onto the curtain and twirled and spun with color saturation. I was enjoying the ride, enjoying the music, but I wanted more from the stage setup.

Then the Key's rolled into one of its hits, "Gold on the Ceiling," and as the group banged out the beginning notes, the curtain fell away to reveal a large circular screen, with lighting bolts on both sides and The Black Keys logo on top. Rectangle hanging lights pulsed up and down from the ceiling. Now, this was a Black Keys show! This was PPG!
click to enlarge

CP photo: Andrew Stein
Even more surprising to me was that after that, The Black Keys played mostly hits, along with Ohio basement music. The latter was found in the grunge scene early in the aughts, the sound of which got The Black Keys started. Only a few tracks from Let's Rock made an appearance, making the show all the better for older fans — they could sing along to their favorites — and younger fans like me, who never got to experience those tunes live before. Many times when musicians and bands tour supporting an album, it's rare to get more than one or two top songs. But The Black Keys put on a show catered to its fans.

Here are more of photographer Andrew Stein's highlights from the show: 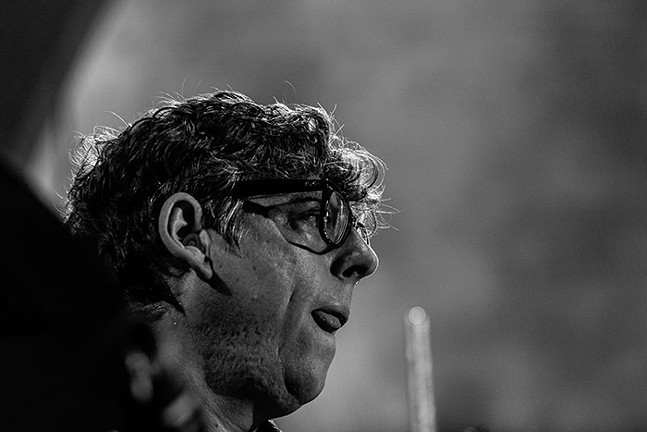