One of the questions we get asked most frequently (along with, "I'm going out for dinner with my girlfriend/parents/entire college class tonight -- where do you recommend?") concerns how we choose the restaurants we'll visit. Other than trying for a mix of cuisines, locales and price points, our basic rule is this: If it doesn't have tables, it's not a restaurant. After all, ambience and service are a big part of the dining-out experience, and eating out of Styrofoam clamshells at home -- well, that's take-out, and that's something different.

But every rule has its exceptions, and we'll make one every time for Cuban food. Jason, in particular, cut his teeth on that island's signature sandwich -- ham, pork, Swiss cheese, pickles and yellow mustard pressed between slices of bread or bun -- during his childhood in Miami. Yes, it is a bit of an odd combination of ingredients, but once you take to it, you never lose a taste for it, or for Cuba's other distinctive combinations of pork, black beans and plantains.

So it was that we descended upon the narrow storefront of The Black Bean, which, we had heard, is an outpost of a Florida mini-chain. The glossy menu suggested there was some truth to that report, but the atmosphere was much more suggestive of a family-run enterprise. The décor was a mix of new (cheerful murals that replicate pre-Revolucion travel posters) and recycled (oceanic charts on the counters suggesting a long-ago seafood purveyor); a toddler was up late, being entertained while another relative managed takeout and stay-in orders.

It is, indeed, possible to stay in and have your food at one of a few tables. Whether eating in or dining out, you can put together quite a respectable meal. While sandwiches and an array of other student-friendly offerings suggest lunch or late night, there are also true entrees that reminded Jason of the slightly faded restaurants of pre-trendy South Beach.

Jason never encountered empanadas in Miami, but a trip to South America convinced him that the combination of crispy pastry and savory filling should be part of every cuisine. Some empanadas are deep-fried, but Black Bean bakes its version, resulting in a crust that wouldn't be out of place on a pie, with a moist, shredded filling. Both chicken and beef varieties were well seasoned and flavored with onions and herbs.

Angelique, a gumbo connoisseur, liked Black Bean's take on this classic Gulf cuisine. Instead of traditional okra, it featured black beans (of course), along with plenty of kick and meaty chunks of fish (sardines?) commingling with firm little shrimp.

Although Cuban bread -- a slightly sweet relative of the baguette -- is unavailable in Pittsburgh, take it from Jason that Black Bean's Cuban sandwich was better than the average offering even in Little Havana, because in place of sliced, roasted pork (all too often deli meat), Black Bean uses luscious shredded pork shoulder. The result is divine.

Pork shoulder made another appearance in the habanero pork sandwich, studded with strips of pepper (presumably not habanero, because we could still taste after we ate one) and bright, crunchy onion. Habaneros are often described as having fruity, even citrus notes, but their heat usually overwhelms those subtleties. As part of a big pork braise, however, the spiciness receded a bit and those notes rang clear.

Our palomilla steak was cut thin, as steaks often are in countries without a lot of grazing room; well done; and, disappointingly, on the tough and gristly side. We should have ordered it cooked with onions and lime, whose bright, potent flavors would have improved the taste, if not the texture. Instead, we ordered it as part of a mixed grill with pork masitas. Now, this preparation was brilliant: a large, lean hunk roasted, then cubed, tossed with seasoning (a proprietary blend that also made Black Bean's fries, though limp, nonetheless delicious), and then sautéed until the cubes crisped. The result was toasty, moist and rich, highlighted by a seasoning blend that was bright and exciting.

Sides included fried maduros (sweet plantain, a nice contrast to all the savory meats), tostones (starchy disks of green plantain), black beans and rice (for best results, add hot sauce) and the aforementioned island fries (served with a creamy, tangy mayo-based dip that Angelique couldn't quit). A guava-cream cheese empanada made a satisfying, not-too-heavy dessert, like a cross between a fruit turnover and a little cheesecake. The only thing missing was a tiny cup of that famously intense Cuban coffee.

Black Bean fooled our mouths into thinking we were in Old Havana. Happily, Central Oakland is a much more convenient destination. 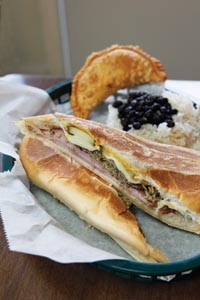