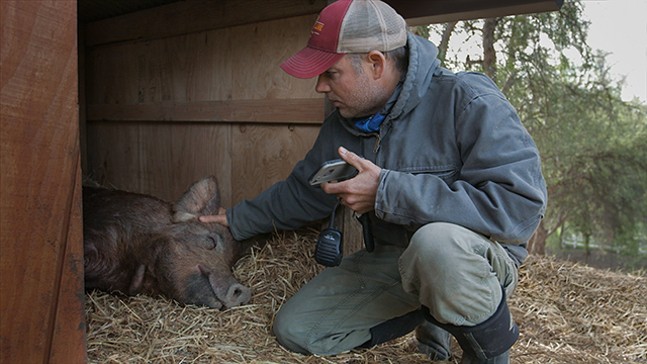 It’s easy to make fun of city folk who suddenly move to the country to fulfill a dream of being a farmer. They don’t know what they’re doing and will surely run into their fair share of hiccups because they’re from the city, dangit! Bless This Mess, a new ABC sitcom, is making a whole series from the premise that a couple from New York has no clue how to run a farm in Nebraska. But in the documentary The Biggest Little Farm, a couple follows through on their idealism, building the farm of their dreams, and capturing the whole thing on film over the course of nearly a decade.

John and Molly Chester are living in a cramped apartment in Santa Monica, Calif., when they get evicted because their new rescue dog won’t stop barking. Molly, a chef, has always dreamt of having a perfect farm to grow her own food, and since they want a place for the dog to run free, they bought an old, rundown farm. The soil was dry and unusable, the aquifer empty, and there was little sign anything there had ever been alive. But their dream for a farm was utopian, the opposite of the abandoned corporate farms that surround theirs. They wanted to revive the ecosystem to include all the animals that would naturally thrive in pre-industrial farms. Chickens, cows, and pigs would live in harmony with the gophers, snakes, and coyotes.

Their vision was almost too utopian. They also have no money (until an unnamed investor pitches in) or farming experience (until a wise old farmer pitches in). They dive in head first, encountering all kinds of failures, from a snail infestation, to murdered chickens, to a feverish pig. They learn as they go and eventually, nature balances itself out to create a harmonious farm (though, like everything in California, still prone to drought and wildfires).

The film is not so much about John and Molly as it is about the farm itself, Apricot Lane Farms. John, who directed the movie, was a filmmaker before he got into farming (he adopted the aforementioned barking dog from the location of a dog-hoarding documentary on which he was working). He didn’t know on day one that he’d make a full-length documentary about it, but filmed the process nonetheless. Once he realized it would be a real movie, he brought in expert nature cinematographers who capture the farm in vivid detail, like something out of Planet Earth. The way newborn maggots crawl around in manure, how a lone rooster befriends a pig, when masses of birds swarm above the peach trees all come together to make something visually beautiful but also revealing about the complexities of farming and what it really takes to grow food.

The film sometimes relies too much on the natural beauty of the farm, glossing over important details that might be of use to the audience. They don’t, for example, mention where they got their funding or how much money they received. Money is obviously a major part of farming and the reason many farmers are struggling, so it’s a bit questionable not to get into details. When they get to the farm, John and Molly also quickly mention the immigrant workers they hired that had been working that farm for decades, through five different owners. In California, where immigrant farm labor is such a significant issue, it feels a little irresponsible not to spend more time on it.

Still, the film is mesmerizing, especially for those who didn’t grow up on or near a farm like Apricot Lane. It would be a useful teaching tool, if not exactly for a wannabe farmer, then for people to understand the benefits of healthy sustainable farming. Because without it, the farm industry is deeply endangered.

The Biggest Little Farm. Directed by John Chester. Opens Fri., May 24 at The Manor Theatre.