Stroll through the Plaza at Downtown's PPG Place most days and you'll hear a lot of things: traffic, people chatting over lattes, kids splashing in the fountain. Walk through in the next few weeks, and you'll hear something more: a symphony of voices, xylophones and snatches of music. And the sounds will follow you -- react to you, actually.

This month, Pittsburgh celebrates its big birthday with BigBots, part of a 16-day technology festival called Robot 250. Eleven local artists set up large-scale technological artworks throughout the city, such as an autonomous sheep-shaped lawn mower in front of Phipps Conservatory and the "Look-See Tree," an artificial log with motion-sensing animal dens that will travel with the city's Roving Art Cart for kids.

One of the biggest BigBots is Grisha Coleman's "Reach, Robot." Coleman, a composer, choreographer and research fellow at Carnegie Mellon's Studio for Creative Inquiry, installed sensors around the one-acre PPG Plaza with the help of roboticist Frank Broz. The sensors use LIDAR technology -- think radar with lasers. As visitors walk through the laser field, they activate sound recordings, which change in reaction to where people are and what they do.

Coleman's recent interactive performance and art installation series at the New Hazlett Theater, echo::system, involved stage environments that responded to dancers' movements. When BigBots curator Ian Ingram approached Coleman, he asked whether she again wanted trained performers. "I said no," she says. Instead, she told him, "I would like to do something with the people who are interacting with the robot as the performers as such, as the triggers of the robot and also as the expressive element of it."

Coleman picked the Plaza in part because of its unsuspecting participants. "The cross-section of people who walk through PPG are not people going to see an art exhibit or anything like that. They're working. They're taking the bus, and they're going home."

And if they listen, they'll hear a sampled composition of Coleman's original percussion music and the recreated voices of Pittsburgh's African-American community, reaching as far back as 1840s abolitionist and newspaper editor Martin R. Delany. "The content was sort of this idea of 'ghost in the machine,'" Coleman says. "We know a lot of jazz artists came from Pittsburgh. But what did Billy Strayhorn say, what did August Wilson say?"

And everyone who plays what Coleman calls "the instrument" will hear those voices say something different. "There's a random selection of a lot of different pieces of music or pieces of text that could combine and recombine with each other to create almost like your personal musical history of Pittsburgh at any given time."

But to trigger even more sounds, you have to obey the installation's title and literally reach toward lines strung 10 feet above the plaza. The title "Reach, Robot" invites the installation's users to consider themselves part of the machine -- one of the themes of Robot 250. Coleman also sees less philosophical uses for the piece. "You could also be 6 years old and just play it, and that would be really great." 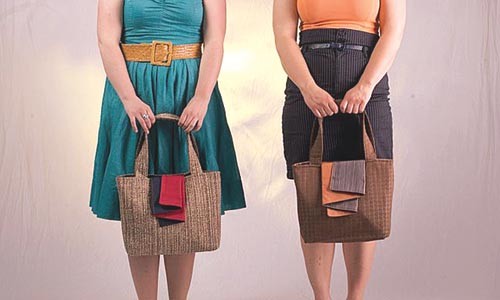 Photo courtesy of Ryan Sigesmund
Handcrafted bags from Ray-Min's Shoulderware are among the goods at Make Shop Rock.