It sounds like such a good idea: Two guys, Jed and Boyd, want to produce a musical. Their production will last 13 hours and involve 318 actors, singers and dancers. The cast will share 6,428 costumes. The musical will cost $83 million, but such a Wagnerian spectacle will be worth every penny. Won't we, the audience, make a generous donation?

The Big Bang, created by Jed Feuer and Boyd Graham and produced by the Civic Light Opera, is essentially an extended sales pitch. Jed and Boyd are trying to convince us that theirs is a worthy cause, and they impersonate the show, describing their epic vision, in a borrowed luxury apartment in New York. They sing the songs, they dance the dances, and they improvise costumes with vases and window-curtains and ropes of garlic. Instead of an orchestra, their friend Alice plays an electric keyboard.

It's a cute gimmick, drippy with comic opportunity. As the leads, Tim Hartman and Marcus Stevens are bundles of energy, harmonizing and exchanging clothing and bounding across the stage. For every reason, The Big Bang should reap big laughs.

There's just one problem: the plot. For lack of a better idea, Jed and Boyd have written a musical about the history of the world. Not real history, but history as filtered by Warner Bros. cartoons. History as Sunday School and funny accents. History as a series of ethnic slurs: shrugging Jews, drunken Irishmen, fascist Germans, lisping Spaniards, dumb Southerners, mobster Italians, war-whooping Indians and a groveling Hindu mother. And let's not forget the black mammy, played by a white guy wearing giant hoop earrings. But don't worry, she's not a slave -- she's just "the maid."

Musical theater has always thrived on ribald stereotypes, but The Big Bang is anachronistic even by Porgy & Bess standards. Watching two grown men dress as Asian empresses and sing about which is better, China or Japan, is like watching Bugs Bunny in blackface: It's too stupid to be insulting. It's too stupid to even be interesting. The Big Bang is the equivalent of two 12-year-old boys telling dirty jokes on the jungle gym -- the same jokes we've all heard, the same punch lines we're all expecting.

When it comes to show tunes, the CLO is Pittsburgh's powerhouse -- energetic performers, beautiful voices, great sets, Broadway-caliber revivals. When the Cabaret at Theatre Square hosts CLO shows, the results are magical: There's a reason that Forever Plaid and Forbidden Broadway played for months to sold-out houses. But The Big Bang is more like a landmine, and the CLO has just misstepped. 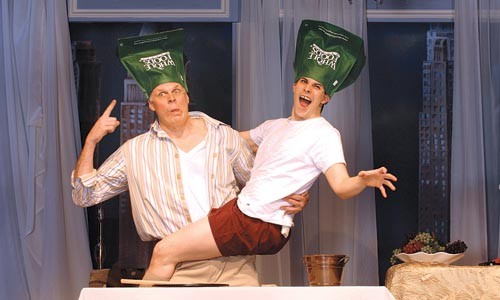