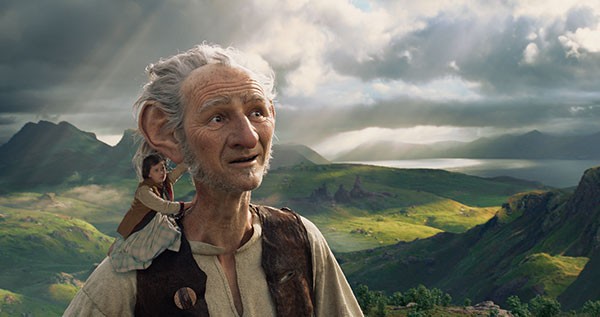 Steven Spielberg is back in the realm of wonder and whimsy with this new adaptation of Roald Dahl’s 1982 children’s novel The BFG. The film combines digital animation with live action, inevitable when one is covering events that occur in both ordinary London and a place called Giant Country.

Spunky Sophie (Ruby Barnhill) is plucked one night from an orphanage by a spindly giant moving stealthily through London’s streets. She winds up in a seemingly terrifying place — Giant Country, an attractive highlands community populated by brutes with names like Bloodblotter and Fleshlumpeater. But her abductor (Mark Rylance, digitally enhanced) turns out to be a sweet fellow, a sentimentalist who collects children’s dreams in jars. Sophie nicknames him “BFG,” for “big friendly giant.” To cement their friendship, BFG takes her to the magical Dream Country, where he catches dreams — and the occasional nightmare — with a butterfly net.

But the bad giants prove bothersome, and Sophie hatches a plan to neutralize them once and for all. It involves, among other things, a quite hilarious visit to Buckingham Palace, where the ever-polite queen (Penelope Wilton) makes a real effort to accommodate a giant-sized guest.

The BFG is a solid piece of entertainment, sure to charm adults and children alike. The screenplay, by the late Melissa Mathison, retains plenty of Dahl’s clever wordplay, in which BFG speaks in an amusing stream of childlike malapropisms. (Spielberg and Mathison previously collaborated on another kid-befriends-oddity heart-warmer, 1982’s E.T. the Extra-Terrestrial.) The star player here appears to be Rylance, who really makes BFG delightful and engaging, in spite of, I’d like to think, all the digital wizardry applied to his human form.