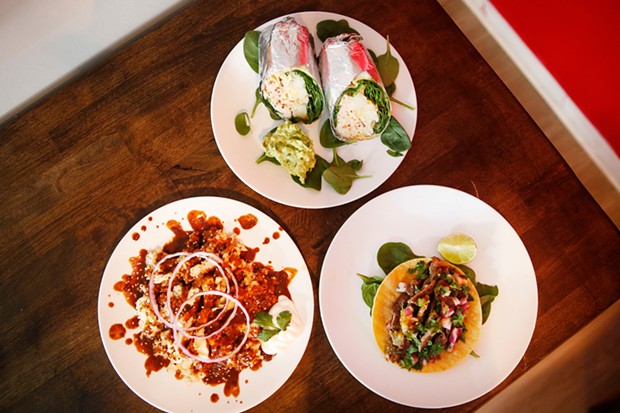 Fernando Espejel's Brassero Grill started in a tiny black trailer pulled by a pickup truck in 2012. He was inspired by his grandfather's restaurant, which started in Mexico City with even more modest origins, on a tricycle. Like his grandfather, Espejel eventually moved to a brick-and-mortar location and has now been treating the city to "gourmexican" fare from its Braddock location since 2017.

Inside of Espejel’s storefront in the Free Press Buildings, decorations are sparse. There's a collection of plants, a leather couch, a few photos, and a neon-lined chalkboard, but that's about it for decor. However, Brassero Grill doesn’t feel cold. There’s a sense of welcoming that permeates the space, the kitchen, the food and the staff.

Espejel describes his menu as a “fresh concept of fast food.” He puts a health-minded spin on Mexican food, marrying the cuisine with East Coast dishes. This doesn’t mean he’s let go of tradition; Espejel experiments around authentic Mexican cuisine, taking inspiration from his mother’s cooking. Fusions, like a Philly ribeye torta and Mexican grilled wings, have graced the menu. Greens show up on every plate, whether they’re wrapped in a burrito or hidden under piles of chorizo.

Tacos can be ordered either street-style (cilantro and onion), or with a layer of melted cheese, spinach, a mound of meat, and fresh guacamole. I chose the latter style for two chorizo tacos, resulting in a sweet, smoky taste balanced with the hint of lime and sour cream.

On Sundays, Espejel offers a brunch menu of American and Mexican dishes such as breakfast tacos, pan frances (French toast), and pancakes.

I decided on chilaquiles: corn tortillas and salsa verde doused in sour cream and topped with an egg and char-grilled steak, jumbled together like an open-faced enchilada. Everything was meant to mix and work together, and it was absolutely delicious.

The steak was the best thing on my plate — maybe even the table. Cut thin and remarkably tender; the flavor was rich and complex, something that only comes from a well-seasoned and well-used grill.

I could spend a lot of time unpacking the flavors at Brassero Grill, but it's best just to experience it for yourself in the restaurant. The lively, spirited kitchen truly brings a warmth to the table and makes Espejel’s food taste even better.

1. DJs
Keep an eye on Brassero Grill’s social media — every now and again (often for Sunday brunch) the restaurant brings in a live DJ.

2. Fresh chips
There are no pre-bagged chips at Brassero Grill. With every order, cooks fry up fresh tortilla chips, perfectly crispy to hold the weighty guacamole.