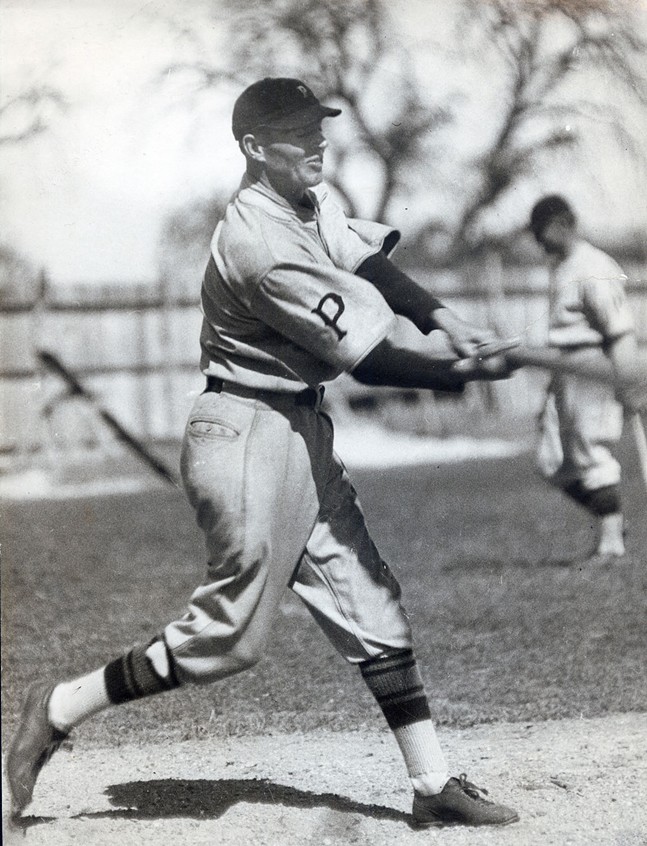 Photo courtesy of the Baseball Hall of Fame
Pie Traynor

Pittsburgh is full of it — civic pride, that is. Any time someone outside the 412 mentions Michael Keaton, Wiz Khalifa or Christina Aguilera, we are sure to remind them from where they came.

However, one celebrity we don’t brag about enough is award-winning playwright August Wilson. The pride of the Hill is a certifiable legend in literature and on Broadway. All of his outstanding plays took place in the sequential decades of the 20th century, and is known as the Pittsburgh Cycle. Since cycle is also a baseball term, it made me start thinking about the best Pittsburgh Pirates by decade. So, with a nod to Wilson, here are the best Pittsburgh Pirates over the past 10 decades — the Pirates Cycle.

If anyone wants to argue that Andrew McCutchen isn’t the greatest Bucco of this decade, I will fight you. Meet me outside the Galleria Mall tomorrow at noon; I’ve got a couple of other fights already scheduled there.

Cutch ushered in an era of hope and change as the leader and catalyst for a resurgent franchise. Three consecutive postseason appearances seemed like something that would never happen. This season he has his team back in a division race. Early in the 2017 campaign, the former MVP was called washed up by many, but now he is hitting bigly. The latest surge will hopefully put an end to all the rumors of him being traded soon. So far this decade, the Pirates are a winning franchise at 614-567.

This was one of the worst decades in team history. A revolving door of managers led the Pirates to a cumulative 681-936 record. Yes, the team almost lost 1,000 times in 10 years, but at least Jason Bay did a heckuva job. In this decade, we also started checking the Pirates box scores on our phones instead of the newspaper. But that just meant we got the bad news a lot quicker. But our stadium sure looked nice.

Barry Bonds only played three seasons with Pittsburgh in the 1990s, and two of them were MVP years. Pittsburgh loved Sophie Masloff, stonewashed jeans and listening to Paulsen and Krenn in the morning. The last decade at Three Rivers Stadium started with a bang but ended with a thud. Jim Leyland got out of town and won a World Series in Miami, and we never saw another winning season for 20 years. The ’90s were a mixed bag as the team went 774-780. Close to .500 but no cigar (a phrase that would take on a whole new meaning in the 1990s, thanks to Bill Clinton).

The 1980s A brutal decade as the steel mills laid off more than 150,000 workers. All the Atari games and Rubik’s Cubes in the world couldn’t distract us as the city slid farther into decline. The Pirates were no help lifting spirits, as some of the players spent time in court on cocaine charges. On the field, the nose candy wasn’t exactly enhancing anyone’s performance as the team floundered with a 732-825 record. One bright spot was the maddeningly consistent hitting of Bill Madlock. The Mad Dog won two batting titles in 1981 and 1983 and was the only bright spot for fans who had seen much better days.

The best decade for Pirates fans by far. The Bucs won six division titles and two World Series trophies. People were smoking cigarettes on buses, in restaurants and in libraries. But nobody cared because they were drunk or on ’ludes and heading to the red-light district on Liberty Avenue. Hall of Famer Willie Stargell ruled the decade, with honorable mentions to Dave Parker (who actually smoked in the dugout) and Al Oliver. While disco music blared from 8-tracks in wood-paneled station wagons, the Pirates went a staggering 916-695.

Roberto Clemente won 12 consecutive Gold Gloves and threw more runners out from right field than anybody in history. No, you weren’t tripping — those lasers were real. A solid decade (848-755) at Forbes Field where opposing teams couldn’t get anything past the team’s second-best player of the decade, Bill Mazeroski. Who, as we all know, started the turbulent ’60s off with the biggest clutch hit of all time.

Yes, Dick Groat won the MVP in 1960, but his 1950s were pretty good too. But the Pirates certainly were not. The Bucs lost 100 games three times and finished 307 games under .500 (616-923). Your grandparents liked Ike, but nobody could dig the Pirates, daddio. There was only one winning season in the decade, so now maybe people can understand how improbable the 1960 World Series win was.

Ralph Kiner led the league in home runs for a remarkable seven straight seasons from 1947-52. He was in beast mode before beast mode was even a thing. Returning GIs from the last major war we ever won witnessed a new power-hitting phenomenon.

Not even Paul Waner, Lloyd Waner or Arky Vaughn could lift the spirits of people during the Great Depression. Paul Waner was the best of a very good class. Big Poison hit .300 in 13 of his 14 seasons in the “Smoky City.” His lifetime .340 average with Pittsburgh is the all-time highest and very likely will never be broken. For the decade, the Pirates were a very respectable 812-718.

A bar in McKeesport is rumored to have coined the phrase “speakeasy.” Which meant “keep quiet about the hooch or some copper will pinch you, see.” You couldn’t drink at the games legally, but the Pirates and Pie Traynor roared through the decade and won it all in 1925. Flappers, Hollywood and the Pittsburgh crime family all had a pretty good decade. 877-666 was their record with no losing seasons. Unfortunately, the Pirates wouldn’t even sniff a World Series for 35 years.