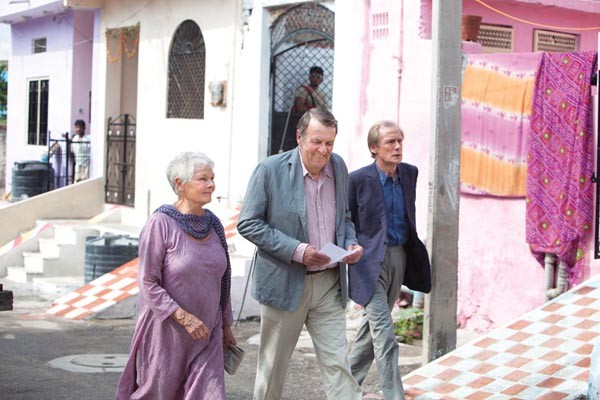 First the good news: A lot of your favorite British actors are in this dramedy, and they all deliver the sorts of winning performances that have earned them our affection. A group of British retirees cash out at home and relocate to a faded residence hotel in Jaipur, India. Among them: marrieds Bill Nighy and Penelope Wilton; retired judge Tom Wilkinson; widow Judi Dench; and cranky former housekeeper Maggie Smith. (There is also a rom-com subplot about two young Indians, but it's strictly TV caliber.)

Upon arrival, the retirees discover that the hotel is hardly as up-to-date as the brochure, and we discover that John Madden's film also has a slightly distasteful vintage air. The comic spectacle of proper British people surprised and whining about how not-like-England India is — the climate, the food, the noise, the antiquated technology, and so on — makes Hotel feel like a TV movie the BBC shelved in the 1970s. Of course in time, our bedraggled Brits are transformed into their better selves by the endearing chaos of India, but this trope of salvation via exposure to those less privileged is also pretty hoary.

But back to the good news: If you can dismiss the silly plot devices that somehow trap these folks in the hotel, and muddle past the dusty platitudes about cross-cultural awakenings, you can unearth a sweet (and occasionally bittersweet) charmer about finding new vitality in the golden years. And for that, we tip our caps to these game actors, who can make any bit of unlikely piffle seem quite compelling.