The Bearden mural in the new T station is only the latest of Pittsburgh's recently restored public art works.

Projects in Mellon Park and at the convention center have also been revived or refurbished. 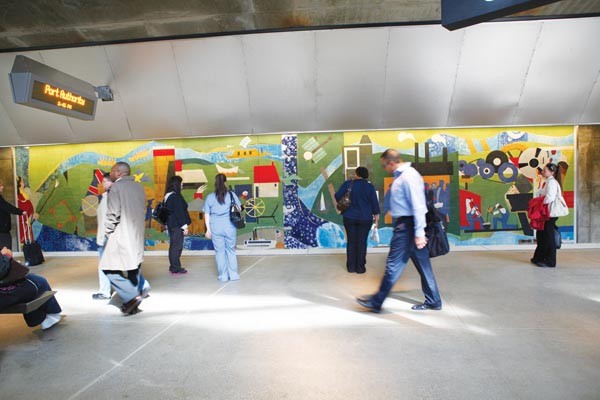 When Anish Kapoor's "Cloud Gate," affectionately nicknamed "The Bean," was installed in Chicago's Millennium Park, it quickly became an identifying feature of the city. All great cities use art to enliven their parks and public spaces, and iconic public artworks have a way of becoming synonymous with the cities that host them. Think Robert Indiana's "Love," in Philadelphia; Robert Graham's "Monument to Joe Louis," in Detroit; and Claes Oldenburg and Coosje Van Bruggen's "Spoonbridge and Cherry," in Minneapolis.

Pittsburgh, too, has some signature public pieces. One particularly compelling work has just been restored for the new North Shore Connector T station. Commissioned in 1984 for the Gateway Center Station, "Pittsburgh Recollections," by Romare Bearden, was moved to accommodate the new light-rail route. Bearden spent some of his formative years in Pittsburgh, and his mural — created out of 780 ceramic tiles — is a city treasure that shows images related to local history.

Accordingly, its conservation has been painstaking. The project included cutting the tiles from a concrete wall, and then removing two inches of that same concrete from each tile. The mural has been cleaned, desalinated and reinstalled on a specially designed mount that will allow it to be removed more easily in the future, should the need arise.

"Pittsburgh Recollections" could easily have been destroyed during the station's reconstruction: As with many public artworks installed in the past, there was no plan for its preservation. Nowadays maintenance agreements are more common, as public and private entities are more aware of the great value of maintaining their public art. The ultimate goal is proper guardianship so that the work is accessible into the future.

Currently, there are a number of similar projects taking place around the city. As part of an ongoing conservation effort for its art collection, the City of Pittsburgh secured a private grant to restore three sculptures that have resided in Mellon Park since last year. Previously in storage, these works are "Five Factors," by Peter Calaboyias; "Steelcityscape," by Aaronel deRoy Gruber; and "Untitled (January Sprinter)," by Tom Morandi.  "Five Factors" and "Untitled (January Sprinter)" were first installed in 1973, at the Carnegie Library in Squirrel Hill, but were removed when the library expanded. "Steelcityscape," from 1976, used to be under the portico at the City-County Building. These three pieces were among the first contemporary outdoor sculptures to be displayed in the city.

Thirty years later, in 2005, one of the most dynamic pieces of contemporary public art in the city was commissioned by the Sports & Exhibition Authority as part of its Public Art Program for the David L. Lawrence Convention Center. "For Pittsburgh," by Jenny Holzer, is a visually dramatic piece. Like Bearden, Holzer chose to make this artwork about Pittsburgh. The piece uses LEDs to scroll the entire texts of five novels set in the city. Placed along the central eaves of the Convention Center, it takes more than 20 hours for Annie Dillard's An American Childhood, John Edgar Wideman's Homewood Trilogy (Sent for You Yesterday, Hiding Place, and Damballah), and Thomas Bell's Out of This Furnace to cycle upward along the sweeping roof. Over the past two years, as part of a warranty to prevent water infiltration, all 428 LED fan boards have been weatherized.

Across the river, at the North Side's Allegheny Landing, another conservation effort will soon be underway. The conservation will include both the park — Pittsburgh's first public sculpture park — and its site-specific sculptures. These include George Danhires's "The Builders"; Ned Smyth's "Piazza Lavoro" and "Mythic Source"; George Sugarman's "Pittsburgh Variations"; and Isaac Witkin's "The Forks." These works, which reflect upon Pittsburgh's industrial and labor history, are owned by the Carnegie Museum. The restoration will be a complex dance between all the stakeholders including the museum, city officials, Riverlife and Friends of Allegheny Landing. This is typical of public art, which often involves multiple entities such as artists, architects, engineers, landscape and urban designers, construction crews and funders.

Often produced by a combination of private and public funding, public art helps to create spaces that enhance the quality of life in a city, making it an attractive place to live, work and visit. It is good news that Pittsburgh's institutions are practicing responsible stewardship of the public art that is here. The next step is to work on bringing more, potentially iconic, public art to this great city.