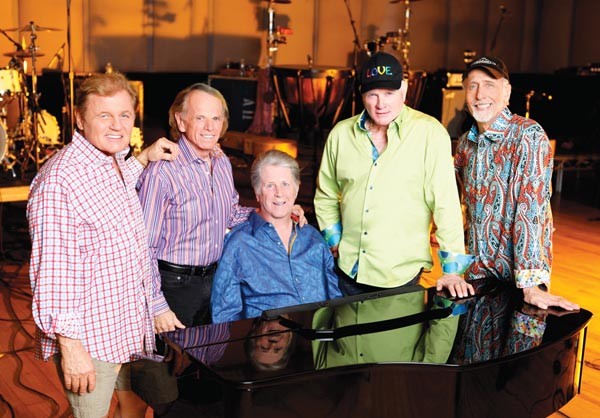 Photo courtesy of Robert Matheu
Catch a wave of nostalgia: The Beach Boys

When a band is around as long as The Beach Boys, each generation in its audience ends up with a curious compression of the group's history and music. A few mythic fragments suggest the outlines: SMiLE (too ambitious for the '60s to contain it); Brian Wilson (went insane from an overdose of genius); Uncle Jesse from Full House (somehow in the band, unclear).

Then there's Pet Sounds, the beloved 1966 album that's still a touchstone for indie and chamber-pop groups. It's the Beach Boys album for people who never go to the beach.

"Perhaps Pet Sounds really is the masterpiece it's supposed to be, perhaps not," writes Mark Coleman, in the Album Guide. "For all its painstaking sonic accomplishment, the most influential thing about Pet Sounds may be its self-obsessed tone."

Overall, Coleman gushes over The Beach Boys, but even he draws the line around 1974, when the group "degenerated into a shameless nostalgia act." While the band released landmark LPs, some of its 30-plus albums look to be awful. ("Still Cruisin' is the absolute pits," advises Coleman.)

Then there's the bizarre string of intra-band lawsuits and competing live acts. By 1999, according to Allmusic.com, "no less than three Beach Boys-connected units were touring the country — a Brian Wilson solo tour, the ‘official' Beach Boys led by Mike Love, and the ‘Beach Boys Family' led by Al Jardine."

In recent decades, The Beach Boys' image has become more monolithic, thanks to a more active Wilson and the well-publicized archeological digs and deluxe reissues of Pet Sounds and The SMiLE Sessions.

Now, to cap it all off, a semi-classic lineup — Wilson, Love, Jardine, Bruce Johnston and David Marks — has reunited to celebrate 50 years. The group played "Good Vibrations" at the 2012 Grammy Awards, with Love working the crowd as Wilson peered out from behind the keyboard.

The ultimate test of the Beach Boys legend may be the band itself. An all-new album, That's Why God Made the Radio, is due June 5. Despite lyrics about "spreading the love and sunshine to a whole new generation," the title track falls a bit flat, and the rhyme, "it's paradise when I / lift up my antennae," is pure Spinal Tap.

But so what? As Coleman concludes, "As long as America, automobiles and adolescents exist in some recognizable form, the Beach Boys' best records will remain essential." Listening to my mom's records as a kid, I knew that at least a third of Shut Down Volume 2 was filler, but "Don't Worry Baby" and "The Warmth of the Sun" still slay me.

And Pet Sounds? Well, let's say I never spent much time at the beach.