The battle over a casino parking garage hasn’t gone through the proper public channels.

Slot-machine impresario Don Barden shoveled more than just topsoil when he joined politicos, entertainers and sports heroes at the Dec. 11 Majestic Star Casino ground-breaking, on the North Side. "We're here to bring positive change and be a positive neighbor to the residents of the North Shore," he declared.

Audiences expect such palaver at staged photo ops. But why bother if you've just finished expressing exactly the opposite sentiments? The same day, the Pittsburgh Post-Gazette had published Barden's comments expressing the desire to have a federal investigation against civic groups, led by the Riverlife Task Force, which had the temerity to question his project -- specifically, the design and bulk of a 3,800-space parking garage.

Your feelings about the garage will depend, quite literally, on your perspective. To dramatize concerns about the parking structure's height and bulk, the Riverlife Task Force produced a rendering in which the building looms over the adjoining casino with the nefarious and overwhelming mass of, say, a new hospital. Meanwhile, in a contrasting image by design architects Strada LLC, the very same garage, seemingly much smaller, peeps coquettishly just above the casino.

In a recent phone interview, Strada principal Michael Stern called the Riverlife rendering "a gross misrepresentation of the facts." He emphasized that his firm's design fulfills all of the city's zoning requirements. He added that esthetic improvements to the garage's initial design, such as decorative screens and a painted surface, are already forthcoming. Likewise, he said, the thoughtful and responsive design for the casino itself displays his firm's and his client's ongoing cooperation with RTF and like-minded groups.

RTF Executive Director Lisa Schroeder counters that the garage, which has grown substantially since the first renderings of it were published, will be "by our calculations more than twice the height of the casino." In fact, the garage will be less than twice the height of the casino, but supporting documents reporting that specific dimension came out only in response to RTF's published rendering -- which, accurate or not, had its desired effect.

"On a major project of this scale," says Anne-Marie Lubenau, "the fact that such information [about the garage] was not part of the public record" is a major concern. Lubenau, who is executive director of the Community Design Center of Pittsburgh, also chairs the Pittsburgh Civic Design Coalition, a group of eight public advocacy-oriented design and planning groups including the Riverlife Task Force, Sustainable Pittsburgh and the Heinz Endowments. As correspondence available on its Web site emphasizes, the Civic Design Coalition has been making inquiries about the parking garage's bulk, among numerous other design issues, to Majestic Star and the Planning Commission for several months.

You could almost excuse Don Barden and Majestic Casino for being behind in a rushed effort to build a complex project, if their rhetoric weren't so stunningly adversarial. You could certainly excuse the Riverlife Task Force for a slightly alarmist representation in addressing a crucial yet overdue design question, especially when many of the city's major design-related organizations support the same position.

What you can't excuse is the lack of leadership from the city and county. Our elected officials want to take credit for Pittsburgh's wonderful qualities as a city -- its neighborhoods, its riverfronts and its architecture -- while sidestepping precisely the public-review processes and citizen organizations that contribute so much to make such things admirable. Sure, there's a Planning Commission meeting Jan. 14 to review the latest garage design, but the commission has to decide the same day. What about deliberation?

Instead, we hear quite a lot about the millions of dollars that will flow into government coffers, once the casino is up and running. Hurry, Pittsburgh! Forget professional evaluations and neighborhood input, because you'll be standing in the way of a big payoff!

Before the first slot machine is even plugged in, this city already has a gambling problem.

Meanwhile, too few people are noticing reports that revenues are down in Atlantic City because of all the casinos that are opening in Pennsylvania. Is Majestic Star really going to live up to all of these promised revenue projections? Or will those, like the parking garage, cast a bigger shadow under renewed scrutiny?

Barden's demands aside, what should really be the subject of a federal investigation is why the city is so lax in following its own laws about public hearings and review processes in major sports and entertainment-related construction. 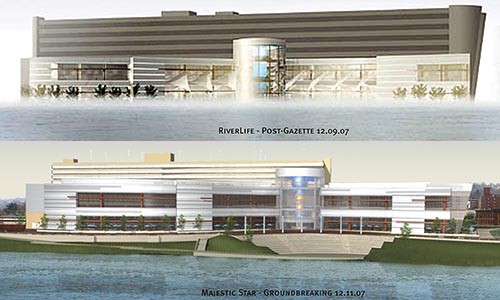