Right now, as I write these words, and as you read them, someone is trying to figure out a way to creating a lasting peace in the Middle East between Israel and its Arab neighbors. Unfortunately for the world, someone else -- perhaps the same someone -- has embarked on a series of blunders that have made it much more difficult.

What hope is there after so many years, so many centuries, so many wars, and ancient animosities that almost seem by now to be genetic? Israeli filmmaker Eran Kolirin's The Band's Visit is one of those sincere, well-made little movies that finds an answer in loneliness, music and the commonalities hidden just below the surface of our watchful façades.

It sort of claims to be based on a true story, but if it is, then clearly Kolirin has taken liberties: No sequence of events in real life could possibly be so perfectly rife with metaphor. His quirky movie has two distinct tones, one terribly bittersweet, the other slightly ironic, yet somehow they seem to come together. Metaphor No. 1, I guess.

The Band's Visit opens somewhere in Israel, at a service station, where a man in a white van takes a large yellow medicine ball out of the back of his vehicle, places it in the front, and then drives away. When he's gone, we see them, standing in the background along the side of the road: Eight Egyptian men in well-pressed powder-blue uniforms, waiting for something to happen.

They're the Alexandria Police Ceremonial Orchestra, and they've come to play a concert at the opening of an Arab Cultural Center, somewhere else in Israel.

But where is their ride? Where is this town they're expected to play? Where are they? This defies reality, of course. They have little Israeli money, and with English their lingua franca as they wander about -- even the English dialogue in the film is subtitled -- misunderstandings naturally occur.

One wrong bus ride later, they find themselves in a town whose name, when mispronounced, sounds like the one they want. It's really more of a place than a town: an outpost, with a small sleepy restaurant run by the edgy Dina. She hangs out there, doing nothing, with Itzik, who's married, and Papi, a shaggy-haired 30-year-old virgin who can't talk to women because, when he tries, "I hear the sea in my ears."

Later, Papi goes out with Khalid, the youngest and prickliest member of the orchestra, and a Chet Baker enthusiast. At a disco roller-rink (no kidding), he asks Khalid what it's like to be with a woman. Khalid can only describe it in Arabic, but Papi shyly swoons at the words. Good thing he didn't understand them: They drip with overwritten sap, and they sound suspiciously like someone else said them all first. (Could we have two virgins on our hands?)

But the story's central couple is Dina (Ronit Elkabetz) and Tawfiq (Sasson Gabai), the melancholy leader of the band. He's a widower, 20 years with the orchestra, which is about to go under for lack of government funding. It gives his life so much meaning that he never lets anyone else conduct. This particularly bothers Simon, who's also been with the band for 20 years, living under Tawfiq's orders, and never finishing a concerto for clarinet that he began decades ago.

The Band's Visit seems to suggest that both parties to the Middle East conflict are in a malaise that will go away only when they finally understand that they've reached emotional rock bottom. Often the characters seem like figures in the world of Jacques Tati, wandering around a landscape that ignores them.

While we're all busy looking at the Big Picture, Kolirin looks at life under a microscope. This view both magnifies and distorts: Egypt is hardly the hapless culture portrayed by the band, and Israelis certainly don't spend their time waiting for something to happen. The Band's Visit oversimplifies the dilemma, and it won't bring about Mideast peace. It may even depress the hell out of you. But at least no shots are fired. In Emglish, and Hebrew and Arabic, with subtitles. 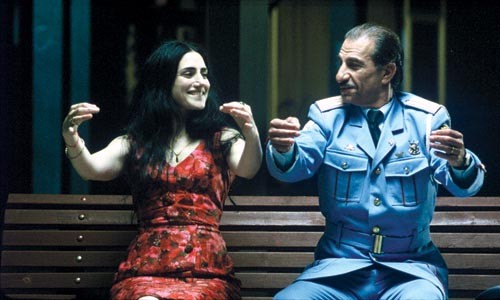