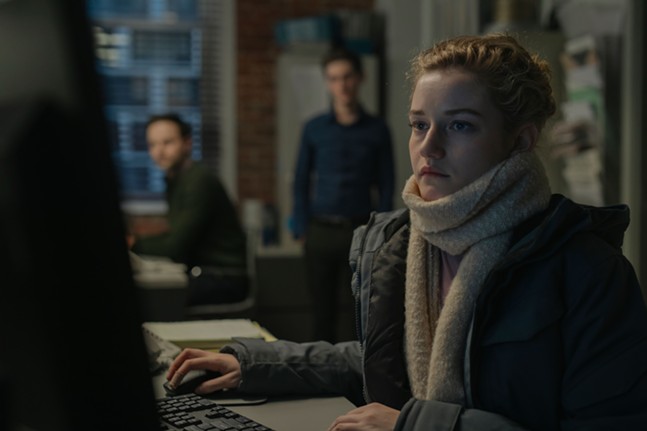 When the waves of the #MeToo movement first started crashing in, so many reactions from the outside were, “How could this have happened?” and from the inside, “We always knew.” Creating a workplace where the boss can do as he pleases, with whomever he pleases, without fear of retribution, does not happen overnight. That kind of environment must be nurtured over many years, until everyone knows that speaking up is considered tattling, and being a tattletale is worse than being a sleaze.

The Assistant, a deliberately slow drama, is set in the office of an unspecified film company, told from the point of view of a new but dedicated assistant to a nameless boss. The film is directed by Kitty Green, who most recently made the oddball documentary Casting JonBenet, about actors auditioning to play characters in a fictional movie about JonBenet Ramsey’s murder. While the subjects and format are different, both films reflect a keen eye for ugly details hiding in plain sight.

Young assistant Jane (Julia Garner) has the “dream job” for any recent college graduate wanting to work in film — the dream, of course, being relative at that age, when anything even resembling working in the creative industry of your choice feels like a huge win. She’s only worked there for two months but is already accustomed to the long hours and mundanity of the job: cleaning crumbs and trash off her boss’ desk, scheduling flights and car rides, doing dishes left in the office sink. These things can happen in any office, but soon sinister details begin to stand out to Jane, like an earring she found on the floor of her boss’ office, the young woman he flew in from Idaho, the jokes from coworkers about not sitting on the office couch.

The world of Jane’s office is deliberately, crushingly bland. The lighting is dim, the carpets are gray, and there is nothing decorating the walls. Jane’s shirt — the only one she wears in the film — is soft millennial pink, but the office is far from how millennial offices are usually depicted (casual, bright). Aside from the smartphones everyone uses, there are no markers of year or time in the film. The discomforting workplace could be set today or 20 years ago. Much of the film is silent, with sparse dialogue and music. Most of the sounds are the din of office work; keyboards clacking, phones ringing, paper printing, men talking.

What shakes Jane out of her office hypnosis is the girl from Idaho, whom her boss hires as another assistant and puts up in a fancy hotel, where he then goes to see her. Jane complains to HR man Wilcock (Matthew Macfadyen), but she doesn’t have enough evidence. Wilcock reads the complaint back to Jane, making it sound paltry and jealous. He shames her into not filing a complaint, and on her way out, he tells her not to worry, because she’s not her boss’ type.

There is no climax in the film, no lightning bolt of action or resolution. It is boring, because the story of men in Hollywood preying on young, vulnerable women was boring to people for a long time. It was just part of another day at the office. None of the other few women in Jane’s office are on her side; they just want to roll their eyes at the boss and get through the workday. An earring on the floor is no different than a crumpled napkin, and it’s Jane’s fault for not knowing otherwise.