The artists of Keystone West make a strong showing at Pittsburgh Center for the Arts.

The works in this show overlap with many approaches, from cartoonish figuration to conceptual-ish materialism. 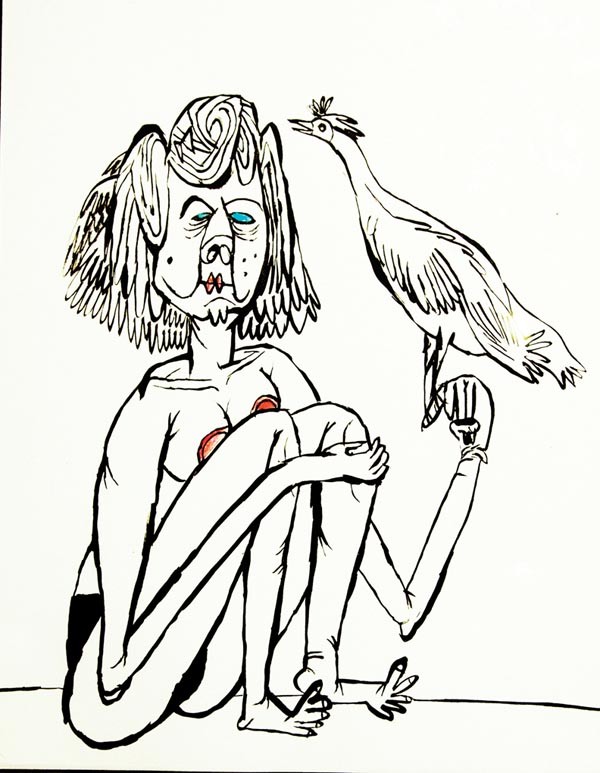 "Give Me Your Rubber Heart," by Renee Ruth Ickes

Keystone West is a small, informal group of diverse yet somewhat like-minded artists based in, or maintaining a strong tie to, Pittsburgh. Sharing an awareness and ambition that transcends the regional, they meet sporadically to discuss each other's work in a way that combines encouragement and scrutiny. And occasionally they put together a group exhibit such as Small Step Giant Leap, at Pittsburgh Center for the Arts.

All six members are experienced artists of some repute locally and beyond. Tom Sarver's "Good & Plenty" (dated 2012, as are all works in the exhibit) is a surreal, meandering doodle unified by a network of vertebrae and tree branches — a one-man "exquisite cadaver" drawing. Renee Ruth Ickes also falls into the broad category of the cartoon- and illustration-inflected figurative art that's been prevalent for a couple of decades. But in Ickes' "Give Me Your Rubber Heart" ink drawings, the cartoonishness mitigates a fairly grim vision of confinement and unease. Equally fresh are gouaches and a sculpture by MJ Sadeghi, whose Middle Eastern heritage shows up in her flattened drawing style as well as the (to American eyes) essentially unfurnished interior of "Reading in an ideal living room."

As for the reworked, there's Thommy Conroy's big oil painting "The huntsman knows all his hounds," which mimics, mines and, hopefully, mocks a tired tradition that maintains some cultural cachet, if only in luxury-lifestyle marketing. In the series "Convent object 1-6," by Carolyn Kelly, the expanded field of unconventional materials is employed in a mash-up of drawings of natural-history skeletons, embroidered flowers, and gold leaf that feels assertively sketchy. Tommy Bones' "NOVA ELLIPSIS" assembles plastic toy model parts to create a boyish dream of a grand spaceship, one that'd never fly. A similar strategy of repurposing the existing appears in David Montano's unbuildable "Studies for Absurd Theatres" collages, while his found-object sculpture "Correspondent" deflected my attempts at interpretation; some things just are. Elizabeth Deasy's untitled painting atmospherically brings the nonrepresentational into the mix.

The works in this show overlap with many approaches found in current art, from cartoonish figuration to conceptual-ish materialism. While there's no consistent style or approach, the artworks never seem to be at odds with one another. The mood seems to be one of mutual support and, importantly, mutual challenge.