The artists in Factory Installed reflect a new sensibility in installation art.

Photo courtesy of Mattress Factory.
Bread all over: Than Htay Maung's "My Offering."

When installation art first started to become popular last century, its cultural appeal owed a lot to its ability to dematerialize aesthetic experience. You know, to create subjective encounters with non-stuff, back when art's rising commodity status seemed to be threatening its authenticity. To put things in context, before this time, for a long while there had been mostly just painting and sculpture; then came the industrial revolution, when there was painting and sculpture and a toilet.

Eventually a "Planet of the Apes"-type situation arose, in which an endless series of toilet spin-offs, knockoffs and remakes came into fashion. Pretty much anything could now pass as a toilet. It didn't even have to be a household utility item, or laden with subversive scatological connotations. At first, it was cool to see other objects act like the toilet, because, why not, right? Plus, there was an unending influx of new and exciting consumer goods eager to put their own spin on the toilet experience. If you happened to bring your cardboard box or clothes-iron to the state fair, you could set it up behind one of those novelty boards where you put your face into the hole and then take a picture and you looked like a fat man in a bikini. It was like that, except instead of "you," it's an inanimate object, and instead of a fat man in a bikini, it's a toilet.

One day, a huge group of artists woke up in unanimous agreement that toilets could go back to being just toilets, and that art would now be mostly limited to colors and shapes of the non-toilet-based variety. Light was OK, too, and maybe text. Being a widely available consumer good had not only lost its cache; the whole idea had actually started to make people uncomfortable. The toilet was branded with the stigma of advanced capitalism, and was no longer invited to any good parties. It was a sad, embarrassing chapter in toilet history.

Between the toilet's fall from grace and the opening of Factory Installed at the Mattress Factory, the thing that happens a lot with stuff that's popular and then not popular and then popular again but for a totally different reason occurred. When this happens with T-shirt styles or a brand of beer, it's called nostalgia. When it happens in a uniquely structured formal environment, sometimes it's art. Back when toilets weren't cool, and people only talked about the things about them that used to be cool but definitely weren't anymore, some things about the toilet's biography went missing. Kind of like all the good stories your parents don't tell you about their twenties, that you know really get at the essence of who they are.

It seems to me that the six artists in Factory Installed are talking about the relationship of toilets to art again. They aren't talking about the disenfranchised-youth toilet or the fat latter-day Elvis toilet; they're talking more about what made the toilet appealing in the first place. They're asking us to question what we think we know about the toilet and about all toilets, really. They've uncovered some of the toilet's previously unpublished correspondence, and assembled it into a wonderful edition, whose preface, incidentally, is written by Walter Isaacson.

Of course, there are no actual toilets in this show. But there are six very different installations that question our understanding of objects we perhaps take for granted as ready-made; of histories we too often depersonalize; and of Manual artistic processes living unjustly in Mechanical exile. Perhaps most importantly, they ask what installation as a medium wants right now from materials.

Pablo Valbuena's video projection "Para Site," for example, disrupts expectations of light as a non-material medium by using it as a tool to replicate the act of drawing. He denies the brick wall onto which it is projected its structural fixity, making it appear to bend and flex like the geometric folds that transform origami paper. The work acknowledges light's ability to manipulate the experience of a space while illustrating the often-invisible design process through which the space became a physical thing.

Like Valbuena, Than Htay Maung's "My Offering" — in which wall-mounted plaster hands proffer small loaves of bread — uses formal simplicity and austerity to restore agency to aspects of material production in which authorship is lost or culturally undervalued. Nika Kypyrova and Veronica Ryan's installations, meanwhile, examine the formal qualities of everyday objects within densely concentrated aesthetic environments, relying on the strong associative properties of particular spectrums of light and color to evoke and displace the viewer's subjective expectations of their function.

By contrast, Natalia Gonzalez (in her Kubrickian basement installation) and Marina Manhaes take a macro approach to this process of questioning. They employ large-scale objects of vaguely familiar natures — in Manhaes' case, giant inflatable plastic sacks —to illustrate aspects of our physical relationship to the immaterial. 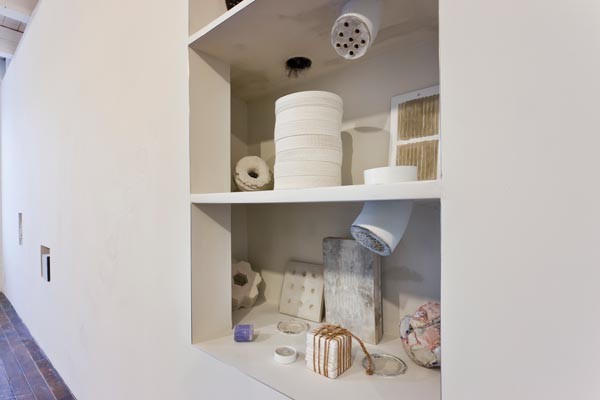 As a whole, Factory Installed seems to suggest that one need not be kidnapped by aliens, wrapped in duct tape, and ejected to the other side of the universe through a giant vaginal canal made of cardboard in order to probe the mysteries of form. Maybe a little bit of formalism and few familiar things can take us a very long way.