The artist behind Fraley's Robot Repair gets a full-scale exhibit. 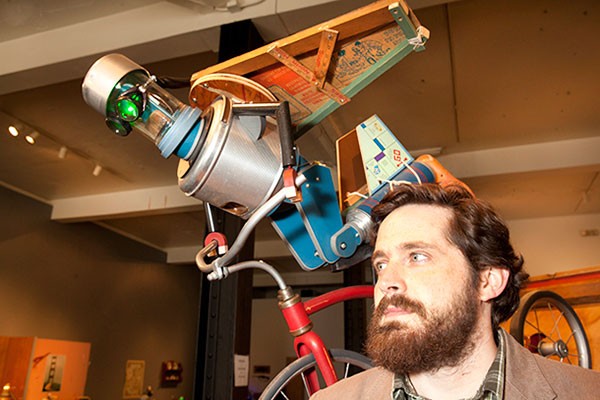 Photo by Heather Mull
Meet Your Maker: Toby Fraley (right, with beard) and one of his creations at Space gallery

THE SECRET LIFE OF ROBOTS

Normally, you wouldn't bat an eye at the sight of an old man shifting his weight onto a cane as he bends down to pick something up. Or at an exhausted worker who's fallen asleep on the couch watching Johnny Carson. But when those figures happen to be robots ... well, that might cause a blink or two.

At least that's the effect Toby Fraley hopes his new exhibit at Space gallery has on people. The Secret of Life of Robots features robot sculptures made from electronic parts and refurbished vintage items, including Thermoses, vacuums, picnic jugs and shoe lasts (wooden molds used for forming leather shoes). Collectively, the robots present 13 scenes of domestic life, set in time periods ranging from the 1940s to the early 1960s.

Fraley, who lives in Bridgeville, is a self-taught artist whose work includes photography, paintings and ceramics. He first lit up circuits with his 2011 pop-up exhibit Fraley's Robot Repair, which featured an abandoned robot finding ways to pass the time in an empty repair shop. Now the robot is back, but instead of unhappily waiting for something that never seems to come, here he is a father. He sits on a chair and moves two cardboard silhouettes — one a squid, the other a whale — in front of a lamp, creating shadow puppets against the wall. His son reclines on a bed next to him, mouth open in amazement.

This scene — which Fraley says people often deem their favorite — was a last-minute addition to the Space exhibit. It was originally in Fraley's sketchbook as something to include if he had the time. He finished it just two hours before the show went up, back in January.

"The space totally freaked me out," he admits. Having never exhibited in such a large space before, he hadn't planned on setting up so many robots. And when the show was ready, he wanted to fill a void near the gallery's back wall. "I was frantically working ... to get that thing up."

"I didn't want to do it if I couldn't have it animated," Fraley adds. "I just didn't want them statically holding the squid and the whale."

Fraley's work strives to further humanize robots that are already doing human things. Many people can relate to the father eavesdropping on his teenage daughter's phone conversation from the other side of the wall, or to the elderly robot gripping a table for leverage after falling. But the doodles on the girl's notebook, and the bowl of hard candies on the old bot's table, make Fraley's subjects more man than machine.

Some of the props are from Fraley's own home, which he says is filled with "vintage household items" he and his wife collect. As a kid growing up in Washington, Pa., Fraley was fascinated by flight; today, the 36-year-old is obsessed with the space-race era. The time period "brought forth streamlined design in a lot of appliances. You had vacuum cleaners that looked like rockets. We have an ice-crusher with a base on it that has fins on the bottom, for no reason [other] than to make it look cool and atomic."

Other sculptures are an homage to Fraley's friends and family — like a piece in which an older robot sits at a kitchen table, looking through a magnifying glass to read the text on a pill bottle. The 1949 copy of Popular Science on the table belongs to Fraley's father; the footage playing on the television is from his mother's favorite show, the 1960s spy series The Man From U.N.C.L.E.

Similar winks made their way into the earlier Robot Repair pop-up. On Fraley's birthday, the lonely robot held a sign reading "Happy birthday mom!" Other parts of the exhibit stemmed from fan suggestions. One man contributed a "retro spray gun" that remained until the show ended. Another wanted to give his girlfriend a special birthday present, and emailed Fraley a list of things she liked. Walt Whitman was one of them, so the artist made the robot look like he'd received a Walt Whitman book as a gift.

On top of these things, the shop's website boasts more than 150 pictures of "satisfied customers" standing in front of the store; the store even has a few Yelp! reviews.

That the public got so involved fits well with Fraley's goal for making public art in the first place.

"[I like] making it so that people don't have to go to a gallery to see art. Those kind of people might not usually go to a gallery. They might be intimidated by going to a gallery. So if they have something just thrown in their face, they might not get it, but it might make them want to visit more galleries in the future."