Fans of the canned meat product show off their skills 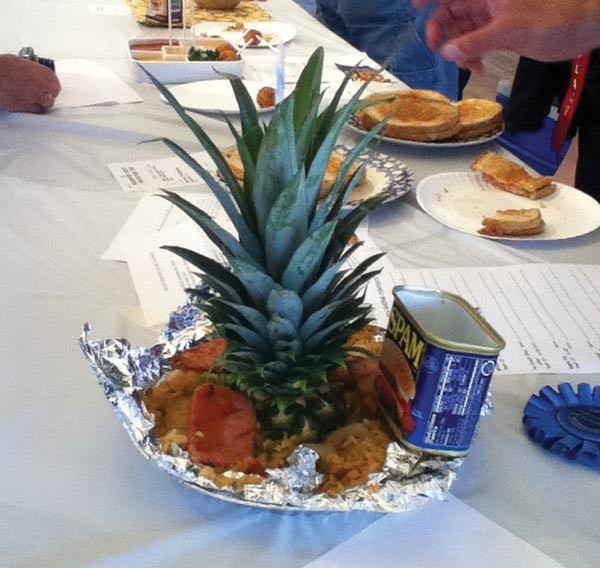 The canned pork-and-ham block, Spam, has its fans, and a few dozen were assembled under a tent at the Washington County Agriculture Fair at 9 a.m. last Saturday for the Great American Spam Championship. The fair-sponsored cooking contest counts as a regional qualifier.

Among the more than two dozen entries in youth and adult categories were casseroles, soup and Spam "pops" on a stick. Before the judging, contestants fussed with styling, with several, in a nod to Spam's popularity in the Pacific Islands, adding tropical flourishes.

Judging took an hour while spectators huddled against a cold wind (surely not helpful for any hot dishes), and fair staffers led a Spam trivia contest, including the Zen-like "Which Spam is not a variety of Spam?"

Michael Sherman, of Hickory, took the top prize with "Spam Oh Laui," a rice-and-Spam dish, sweetened with ginger and apricot preserves, and garnished with a pineapple topping. Spam is no girlie food; Sherman explained the entire dish had been cooked on the grill. This was Sherman's debut, but his pedigree is strong: His girlfriend Jane Worthington has won three times; Worthington's granddaughter has won the kids' prize; and both raved about Spam's versatility, guessing that the family "eats a can a day."

The Spam event is over, but the fair runs through Sat., Aug. 18. There's still time to visit the prize-winning pickles, eat fried-everything, buy a hog and, if you're still looking for competitive culinary events, check out the milk-chugging contest Saturday night. www.washingtonfair.org