The Andy Warhol Museum wows with the glitter and grit of Devan Shimoyama: Cry, Baby 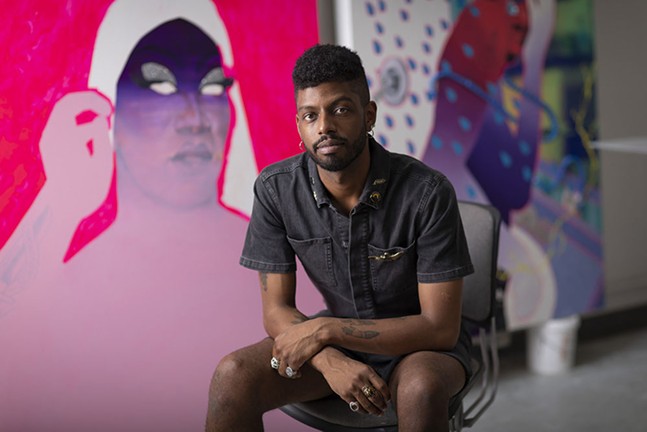 Joshua Franzos
Artist Devan Shimoyama, shown with his artwork
While accompanying Devan Shimoyama during a tour of his first museum solo exhibition, Cry, Baby, at The Andy Warhol Museum, the word “dazzling” comes to mind. The Pittsburgh-based artist and Carnegie Mellon University professor demonstrates a flair for the wild and dramatic, with paintings and sculptures liberally festooned with glitter, boa feathers, and rhinestones. But beneath all the pleasingly distracting sparkle and fantastic imagery simmers racial, sexual, and economic anxieties, all of which powerfully resonate throughout Shimoyama’s work.

The show – all presented by Milton Fine Curator of Art, Jessica Beck – takes a tender approach to these issues, which disproportionately affect certain communities close to Shimoyama, a young, queer, Black man. As he puts it, Cry, Baby is all about “self-discovery, self-love, and self-care,” particularly for people who, like him, “don’t feel like they match a certain type of Blackness or masculinity.” Even while he challenges boundaries on gender performance and sexuality, he embraces intimacy and vulnerability.

Nowhere is this more apparent than in his barbershop series, where he explores a key similarity between heteronormative Black men and drag performers – the need to project the appearance of beauty, glamour, and success. Using images taken from hairstyle flipbooks, he drapes the hyper-masculine space of the barbershop – a space in which Shimoyama admits he never felt comfortable – in materials familiar to the drag scene, such as sequins, colorful beads, and costume jewels, as well as soft, feminine touches like silk flowers and bright, pink outlines. Interspersed are gold chains associated with wealth and power.

This plays into another set of paintings portraying Shimoyama and other Black men in the safe confines of their bathrooms. While the images may seem benign, even comforting, there’s an understanding that the subjects escape to these spaces out of necessity rather than choice. 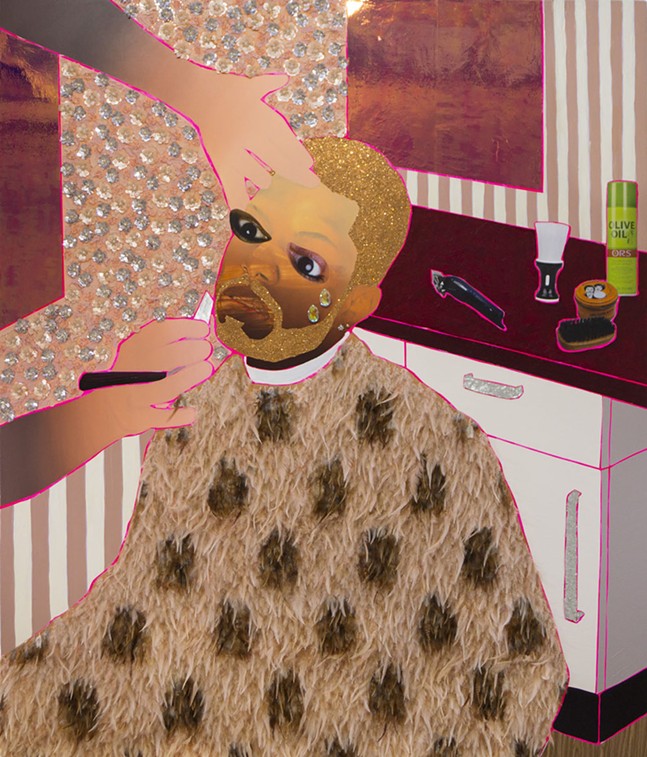 Courtesy of Jim Spencer and Michael H. Lin
Devan Shimoyama’s Sit Still
Even as Shimoyama uses the barbershop series as a way to address the misogyny and homophobia, he’s careful to never demonize the barber figure, even in Sit Still, a self-portrait of Shimoyama weeping jewel tears as a hand brings a straight razor to his neck. He views Black masculinity as a safeguard, a defense mechanism these men use to keep them safe in a racist, hostile world.

As a person raised primarily by his mother and other female relatives, Shimoyama identifies more with women, a characteristic evident throughout the select works. While he obscures his subjects’ eyes with found materials, the eyes in his self-portraits are cut-out collage images of his mother’s eyes or the eyes of his other female relatives. The fantasy-driven Daphne and Daphne’s Prayers, two paintings that portray Shimoyama as an inversion of the Greek nymph, favor the feminine.

Courtesy of the artist
Devan Shimoyama’s Snake Baby
Shimoyama also draws on folklore and beliefs from his Japanese and Trinidadian background, ancient Babylonia and Sumeria, and the African diaspora. This plays out most prominently in his repeated use of the snake. In contrast to the Christian concept of the creature as the Garden of Eden villain, Shimoyama’s sequin-covered, two-headed serpent aligns more closely with the African deity Mami Wata by serving as a companion, winding itself around each subject in a loving, protective embrace.

Shimoyama says many of his pieces are directly inspired by a need to make sense of the disbelief, horror, and betrayal he feels a young person of color in America. He views his 2015 Fire Island photo series as a response to the Emanuel AME Church shooting and the death of Sandra Bland. His flower-covered sweatshirt and swing sculptures are dedicated to Trayvon Martin and Tamir Rice, respectively.

Painted immediately after the 2016 presidential election, Flood exudes despair through the image of Shimoyama cowering on an American flag, snakes hissing in pain around him and his mother’s eyes, full of anger, watching from the backs of his hands as he covers his face. Weed Picker shows that even in times of calm, such as tending to one’s garden, tensions still loom, as signified by a telephone wire in the background from which hangs a pair of Yeezys (the line of sneakers made by Kanye West).

There an overall immediacy and urgency to Shimoyama’s works. They demand attention and evaluation, not with shock, but with substantial flash and striking, meaningful imagery. It would be an understatement to call Cry, Baby impossible to ignore.

PlumePGH tracks the source of air pollution in Pittsburgh, and how it gets to your home