Director Marc Webb does the best he can with a story arc that barely tweaks what came before. 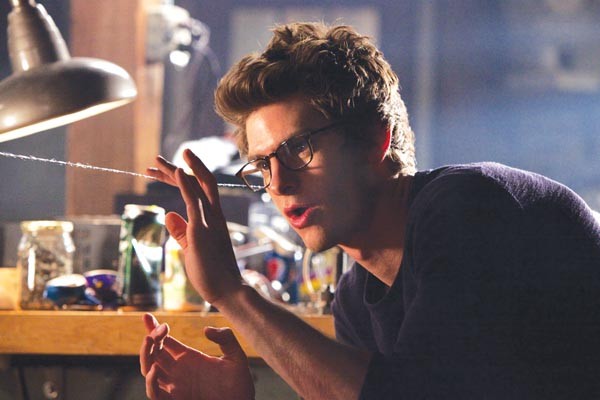 Peter Parker (Andrew Garfield) gets his web on.

In 3-D, in select theaters

The Amazing Spider-Man "reboots" the franchise, with the reedy and more flexible Andrew Garfield taking over as Spidey for the more densely packed Tobey Maguire, and with Emma Stone as his new love interest. Is Garfield a better Spider-Man than Maguire? What-ev. Is Stone better than Kirsten Dunst? How could she not be? And so on. Uncle Ben and Aunt May have been recast, too, with Martin Sheen and Sally Field, and I think you'll really, really like them. (Thanks to Sheen, Uncle Ben's death has a little more resonance this time.)

Director Marc Webb, slumming in Blockbusterland after his nice little (500) Days of Summer, does the best he can with a story arc that barely tweaks what came before. Peter Parker's intellect increases along with his strength after the spider bite. (Who knew spiders were so smart?) The maddened scientist here — Rhys Ifans, just the actor we all wanted to see as a Spider-Man nemesis — is like the Green Goblin and Doc Ock before him: He doesn't mean to be bad.

The thin story revolves around Peter's search for why his parents disappeared, and the search leads him to his scientist-father's former partner (Ifans), a one-armed genius who's working on cross-species genetics, and who turns into The Lizard after Peter helps him figure it out. (Lizards can regenerate body parts — get it?) There's one especially touching scene involving a kid and Spidey's mask, and Denis Leary is surprisingly warm as a police captain who's also the father of Spidey's girl. As for the 3-D: It's useless for the first hour and present for the second.

Maguire enunciates when he talks; Garfield talks too fast. Surely there's a young actor who can play the middle. The franchise's diptych of themes remains the same: We have an obligation to do good if we can; and science is neutral, becoming good or bad in the hands of the person using it.

And so, in conclusion, I ask: Is there anything left to say about a Batman movie? Stay tuned.