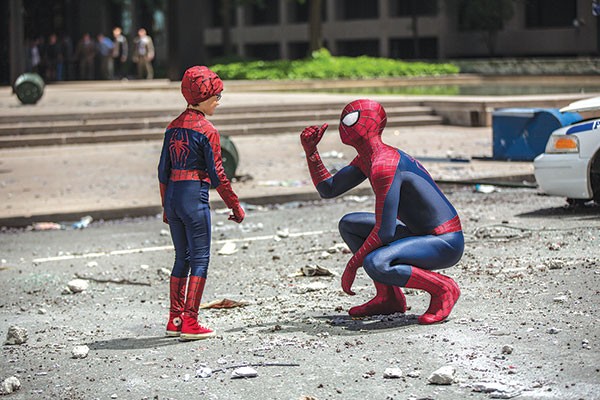 OMG! Look who's trying to kill Spidey now! He says "hi" to a lonely milquetoast electrical engineer (Jamie Foxx) from Oscorp, and the guy becomes Electro! He won't give his blood to his lonely pal Harry Osborn (Dane DeHaan), so Harry turns into the Green Goblin!

In The Amazing Spider-Man 2, Spidey handily trounces everyone: After all these years, action is still his reward. But his battles come with losses that almost take him out of the swing of things, and together they tell a plaintive story about the fatal consequences of feeling alone in the world.

Marc Webb's film is indeed pretty amazing in the FX department — the best money can buy. Even more amazing, though, is its tenderness as Peter Parker (an affable Andrew Garfield) tries not to lose his down-to-earth humanity. This involves his beloved Gwen (Emma Stone), his beloved aunt (Sally Field) and his beloved long-dead father (Campbell Scott).

As the movie draws to its protracted climax, we know what won't happen. We just don't know what will. The plot is super-fanciful, although it's somehow easier to believe Electro exists than to swallow a magical hidden Manhattan subway car. Silliness aside, it's good to see that the heart of Spider-Man is still beating.