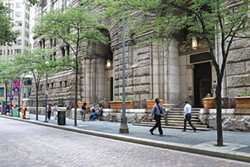 Howsie says he has worked to address the communication issues identified in the ACLU report. The office has incorporated technology to better serve their clients, and attorneys now use video-conferencing to communicate with clients who are in jail.

"That’s not to take the place of a jail visit, but in a pinch, in some instances, we can schedule a video-conference for the same day," says Howsie. "It allows us to [build] a relationship with the clients much sooner."

But these improvements don’t address all of the core complaints of the ACLU report. In Allegheny County, clients are represented by different attorneys at different points in their case. So they work with one lawyer for their preliminary hearing and another when their case goes to trial several months later. This organizational structure is called "horizontal representation."

"If you have a system in which people have different lawyers for each proceeding versus a system where you have a lawyer sticking with a case for its life, the second is much more advantageous," says David Harris, a professor at the University of Pittsburgh School of Law. "To have a lawyer from the early proceedings to the end makes a big difference. And that says nothing of the lawyers in the Allegheny County Public Defender’s office. Even if they do everything right, you sacrifice continuity and knowledge of the case if there’s a new attorney."

Several attorneys, who work and interact with the office to varying degrees, spoke to City Paper on the condition of anonymity out of fear of jeopardizing those relationships. One attorney says the problem with the current system is that, "oftentimes critical information is lost moving from one stage to the next stage."

They also say it’s important for clients to meet their lawyers prior to preliminary hearings, but in Allegheny County, clients are met at the jail by a paralegal who performs an intake evaluation. However, Howsie says they can request to see an attorney.

He also says his office, and larger public defender offices, don’t have enough staff to do vertical representation. He says the structure also doesn’t make sense for a large county with 130 municipalities.

"You have at least 100 different locations throughout this county in addition to city court," says Howsie. "It would be an enormous waste of resources — the mileage, the expense, it would never work. It’s just not possible."

Some with knowledge of the office say this is a sign that the public defender’s office is underfunded and under-staffed. But they admit it’s a statewide problem, since Pennsylvania is the only state in the country that doesn’t allocate funding for public defense.

But some say a funding shortage still exists. Such allegations can be found in a lawsuit filed last month by Victoria Vidt, an employee in the public defender’s office who says she was passed over for a promotion in part because of age discrimination and critical remarks she made about the office. According to the lawsuit, Vidt sent Howsie a memo regarding how the lack "of Public Defender funding was endangering the constitutional rights of poor criminal defendants."

Neither Vidt, her attorney nor Allegheny County spokesperson Amie Downs would comment on the pending lawsuit.

For Sala Udin, a former Pittsburgh city councilor who also served in an informal group charged with evaluating issues in the office, the improvements have been heartening. He says the taskforce hasn’t met in more than a year.

"The concerns were that the public defender’s office wasn’t getting the attention that was necessary," Udin says. "They didn’t have enough attorneys, the clients were waiting too long, and the sum total is that poor people who rely on public defenders, who have a constitutional right to defense, weren’t getting adequate representation. I understand that things have improved some, but a lot remains to be done."