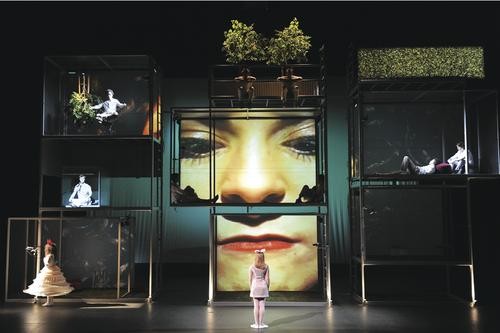 "What the hell was that I just saw?" grumbled a nearby theater-goer leaving what I had enjoyed as a fascinating multimedia spectacle. OK, the Carnegie Mellon University School of Drama's The Alice Project is not for everyone. A familiarity with the play's inspiration, Lewis Carroll's Through the Looking-Glass (And What Alice Found There), would probably help; just don't be pedantic about it. This is an interpretation, actually an experiential one, of that book's sequel, Alice's Adventures in Wonderland.

Alice is the starting point, with the occasional aside (comical or contemplative) augmenting the basic story, and a geek's dream of techno-wizardry to bring Looking-Glass World thrillingly and scarily alive. The multi-level set -- three three-story towers -- features huge video screens that vary from a full composite background to a tangle of discrete cells with repeating or even competing images. This is Alice in 4-D.

As the name implies, the Project is a rather large and ambitious joint venture "devised by the company" of 13 multi-cast actors, nine designers and two writers (Dan O'Neil and Liz Ellison), among other contributors, all under the direction of Marianne Weems. The result is huge but not cumbersome, and definitely on sensory-overload mode.

The actors switch or even morph into different characters. Alice herself is portrayed by three people: the storybook blonde (Tess Primack, also a mean Red Queen), a perky brunette (Krista Marie Yu, the "real" Alice ); and even a guy (Evan Barron). Also notable are Dan Weschler in the extended version of the Gnat, and his collaboration on the play's original songs with fellow cast members Alex Falberg (a notable White Knight), Ben Ferguson (a wry White King), Ryan Melia (a warmly thoughtful interviewer) and Arya Shahi, folded up to suggest the shape of Humpty Dumpty. If I had to quibble, it would be about the omission of the Hump's logocratic arrogance.

Of course The Alice Project is confusing. That reflects the point of view of Alice herself, making her way through a world where things change constantly and nothing is as it seems. But she did have fun, after all, and so can we.