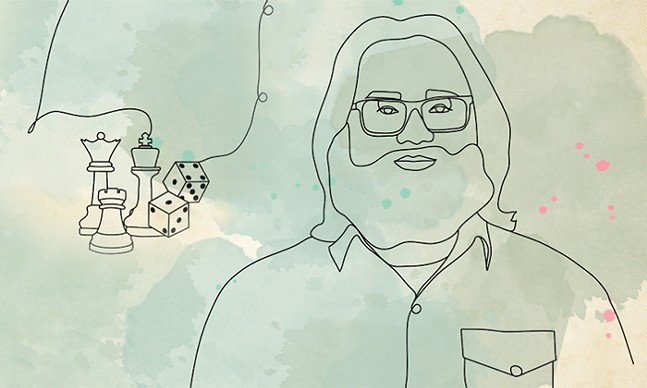 Artwork by Allie Reefer and Megan Jones (JeganMones)
The Alchemist of Sharpsburg
A new theater series kicks off this week with an interactive show that lets Pittsburgh audiences choose how it will progress.

From April 7-17, City Theatre will provide the stage for The Alchemist of Sharpsburg, described in a press release as a “live, interactive exploration of Candra, a Hindu-practicing, black metal-listening game enthusiast with multigenerational roots" in the community of Sharpsburg. The show is part of the People of Pittsburgh series created by RealTime Interventions artistic directors Molly Rice and Rusty Thelin, with Rice describing it as "theatrical portraits of extraordinary ordinary Pittsburghers."

“And what we mean by that is these are people that are not Pittsburgh-famous. They are truly everyday people we’ve met in our travels in Pittsburgh," says Rice. "And the other element of these shows is that artist groups work together to create these theatrical portraits.”

The pair moved to Pittsburgh in 2013 and wanted to create something to amplify the voices of overlooked communities. Candra’s life will be the main subject of the show, and audiences will have the opportunity to hear about different aspects of his life, all of which unfold in a unique way.

Thelin, a graduate of New York University's Tisch School of the Arts and Playwrights Horizons Theatre School, says that after talking with Candra for the first time, he knew "this was someone who contained multitudes."

"He has challenged my assumptions about religion, spirituality, and society in general, and led me to see the neighborhood of Sharpsburg in a new, more nuanced way," adds Thelin. "My hope is that the show will do the same for our audiences.”

The interactive aspect of the show will allow audience members to decide which way the show will go, and which information about the subject will be shared. Rice says that while it's "a technically sparse show," it's still rich in "imaginative prompts."

“I think of it as the combination of a biopic and a game,” Rice says. “It’s a structure, and it’s not like anything I’ve done before, because it is a branching narrative, and the audience will have moments where they vote on what they want to hear more about. But if they vote for one thing, they don’t get to hear as much about something else. So it’s very much in the vein of choose-your-own-adventure. And they can come back in here, and if the audience votes differently, they can hear a little bit of a different story if they want.”

“We really wanted to start welcoming other people into our artistic teams so that they can assume artistic leadership and can hear from more voices other than our own,” Rice says.

The company hopes to hold the second People of Pittsburgh show in September, which will feature an "amazing resident" of Braddock, Pa. and will be helmed by Rice and visual artist Christine Bethea, with Thelin directing. A press release says that starting in 2023, the public will also be able to nominate subjects for the shows.
People of Pittsburgh: The Alchemist of Sharpsburg. Thu., April 7-Sun., April 17. City Theatre. 1300 Bingham St., South Side. $25. realtimeinterventions.org