The Absolute Brightness of Leonard Pelkey at City Theatre 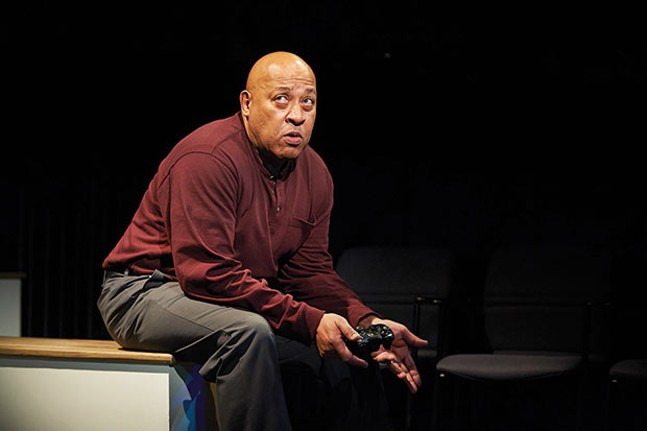 With an eye fixed firmly on my karma, I note that City Theatre presents the local premiere of James Lecesne’s The Absolute Brightness of Leonard Pelkey. Whatever else there is to say about Lecesne’s talents, the most remarkable is his having written the Oscar-winning short film “Trevor,” which lead to the creation of The Trevor Project, a nationwide organization combating LGBTQ teen suicide. I wouldn’t dare give a hero like that a bad review.

Not that I want to: Lecesne has written this one-man, one-act show with heart firmly attached to sleeve, and there’s much to enjoy. The title character is a 14-year-old who, at the show’s opening, has disappeared. We then follow a hard-bitten New Jersey detective’s investigation and meet the various people in Leonard’s life.

A child of enormous heart and energy (the “brightness” of the title), Leonard altered the life of every person he touched … which most don’t realize until Leonard (and I’m not giving anything away) is found, the victim of gay-bashing, at the bottom of a lake.

It’s such a horrific tale, but Lecesne manages to keep it from being a dirge-fest with the assorted “wacky” characters he creates. I will say I felt a little … uneasy? … that the death of the plucky gay kid is used to teach life lessons to all the straight folks. And it’s only because I’m a bitch I kept thinking of the classic line from the 1988 film Heathers: “I love my dead gay son!” But I will also say that when the boy’s sort-of stepmother speaks at his attacker’s trial, Lecesne’s writing soars into the stratosphere.

Laura Savia directs the City Theatre production featuring Keith Randolph Smith. Savia and Smith make an interesting choice to play against the sadness and sorrow of the story perhaps, because like Lecesne, they want to avoid 70 minutes of unrelenting gloom. On the other hand, the tone feels maybe a little too light for such a harrowing journey.