The 412 with slenderbodies | Pittsburgh City Paper 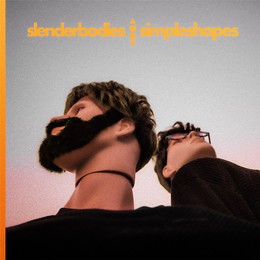 Search slenderbodies on Google, and the first thing you’ll see is their bio: an “indie-pop duo, obsessed with guitars and falsetto.” (Don’t worry, the California band, made up of Benji Cormack and Max Vehuni, has nothing to do with the fictional, male supernatural creature you’re thinking of.) It was precisely that obsession with sweet melodies and a high vocal range that caught my ear in 2017. From slenderbodies’ five-track EP Fabulis, their track “anemone,” a delightful swim in their signature soothing sound, immediately sparked an infatuation with the dream-pop duo and rocketed me down their soft, mesmerizing, genre-blurring rabbit hole. At first, slenderbodies’ music is seemingly simple and mellow — but as their songs build, more layers immerge, creating a tapestry of sound that encompasses the senses, mind, and soul, resulting in an overwhelming warm feeling of peace.

Fast forward five years, two albums, an EP, and numerous singles, and the band has debuted a new project, simple shapes. It stays true to their breezy, falsetto-soaked releases of the past, and, according to Mox and Bonji, Max and Benji’s avatars (alternate personalities which appear as mannequins in their music videos), the album was born from talk of authenticity.

“They expressed fear of losing their humanity to commodification,” Mox says of the pair's human counterparts. “And they mentioned paralysis at the overwhelming feeling of feeling their decisions were out of their control! They also explored simple pleasures, aiming to find the sonic equivalent of comfort foods so that their music would still be enjoyable to listen to even as they explored topics they consider dark.”

Now on tour in support of simple shapes, slenderbodies chatted with Pittsburgh City Paper ahead of their stop in Pittsburgh for The 412, CP’s music feature where you can find band/musician updates and fun, random tidbits of information, all in one.

4 questions about life
What would your ideal, zero-stress, no responsibility day look like?
wake up with some tea and maybe a green juice or smoothie. go for a hike or run, come back and watch some tv, youtube, or play video games. around midday maybe start making music or just playing instruments. keep on going with that until around 6 or 7, order some yummy food, read a little bit, and go to sleep :)

What's the most daring thing you've ever done?
cheated on a math test once in seventh grade!! scariest moment of life. outside of that cliff jumping into the ocean at bean hollow beach as the tide was going out.

If you had to get a tattoo today, what would you get?
probably a little sprinter van to signify where we're at right now on tour

Where is your happy place?
anywhere in the woods. currently in vermont enjoying the sounds and feel of nature every day.

1 question about books
What's a book you wish you could read again for the first time?
the eragon books. we both read them as kids and completely changed how i viewed fiction and fantasy in general. the character development and worldbuilding is just so excellent.

2 questions about music
What's your go-to Karaoke night pick?
benji: “welcome to the black parade” by my chemical romance.
max: “the sweetest taboo” by sade

If someone opened your preferred music app (Apple Music, Spotify, etc.) right now, what song would be playing?
benji: “i never liked you” by future
max: “never gonna be alone” by lizzy mcalpine