The 412: Centipede Eest returns (without Josh) 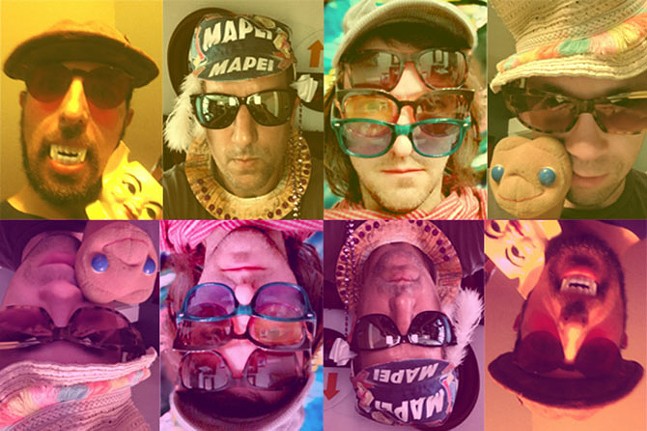 In the mid-aughts, Centipede Eest was one of the most alluring and exciting bands in Pittsburgh.

In early October 2008, Centipede Eest played two back-to-back release shows for its second full-length album, Confluence. The first bundled up outside in recording studio Machine Age’s parking lot and the second close by at Gooski’s. The outdoor show, according to a review from former Pittsburgh City Paper writer Aaron Jentzen, drew “an appreciative crowd that included everyone from local musicians and music-scene regulars to tots.” Then at Gooski’s which, according to former CP writer Margaret Welsh, was “so packed, I thought I was going to have a nervous breakdown. It was weird.”

But by 2012, the last time the band posted on Facebook, they had gradually grown less active, and the members eventually went their separate ways. However the five-piece group — guitarist Jim Lingo, guitarist and singer Nick Patton, bassist Caulen Kress, utility player Josh Tanze, and drummer Sam Pace — still kept in touch and recently, they got the opportunity to reunite and perform once again. Before Centipede Eest takes the stage for the first time in eight years, CP chatted with Lingo about how they spent the last few years, the show, and what’s next for the band.

Centipede Eest is playing its first show in eight years. How did that come about?

I'm booking this show for Cooper [Crain] in Bitchin Bajas. Centipede had made fast friends with his other band, CAVE, back when we were touring; played some great shows with them. I half-jokingly asked [the other Centipede members] if they wanted to play this and everyone responded "yes" without much hesitation. I was kind of surprised 'cause I figured the four of us would never play together again. I guess the timing is right!

Houses were bought, vows were spat, babies were conceived, crops were harvested, trails were blazed. ... As far as what we've been up to musically: Nick [Patton] and Caulen [Kress] played together for a spell in Cocoon II. Sam has been holding it down in Come Holy Spirit. I made about four albums of electronic music with a friend (lingo & mcdoo) as well as currently playing in a free-improv trio, Dog Dynamics, and a father/daughter country-tinged band, Merce Lemon.

We kind of knew things were shifting, but didn't really know the direction. We had two shows where we played as a truncated unit. Was a slow fizzle I suppose. Life happened.

How does it feel, since it’s been so long?

Feels pretty good, haven't played much rock 'n' roll in a while though. Gradually getting our legs back. (Pun intended.)

Why is Josh Tanzer not playing?

He's living the dream in the mountains of Northern Cali. If I had half a brain, I'd be out there as well.

How are you preparing for the show?

What can fans expect? Are there any new tunes in the works?

If I've learned one thing in my middle-age, it's that expectations lead to disappointment. New tunes? Maybe one new short jammer for the show. We still have about two albums worth of material that never got released. Also talk of recording another album, just off the cuff.

Our first one, Cheeks of Neptune, was recorded after we were together for just four months, I think. Just kinda blew it out of our systems. We'd like to use that excitement and energy and funnel it into a recording. Not crossing any fingers though.

Will there be more shows in the future?

We hope so. We'll see how this one goes.

Anything else about the show or the band that you want people to know?

A vote for us is a vote for democracy. Some of us don't have any tattoos. This show will be a good time, or the owner of the venue will give you a foot massage in one of his many Bigfoot costumes. Customer's choice. Excited about Alvin Rey playing the show. He's got a great 'kitchen sink' approach. Mary Mack is a great DJ as well.

The 412 with Jim Lingo of Centipede Eest

The 412 is CP’s music feature where you can get local band/musician updates and fun, random tidbits of information all in one.

If you could only listen to one song for the rest of your life, what would it be and why?

I work at Jerry's [Records] so I'm partial to records. LOVE cassettes too, but NOTHING beats live music. I wore headphones in my youth for about nine years straight. Done with that.

What was the last earworm that you had?

One music recommendation for fans of your music.

The underappreciated and aurally sprawling catalog of the THINKING FELLERS UNION LOCAL 282!

Do you believe in ghosts, the supernatural, and/or magic?

Can't mess with the classic ones. Someday I’m gonna finally make a serious mummy costume out of ace bandages or toilet paper. Gonna wrap myself up until I can't bend my arms & legs, for that authentic stiffness.