The theatrical gimmicks are transparently — nay, determinedly and even victoriously — phony. And funny. 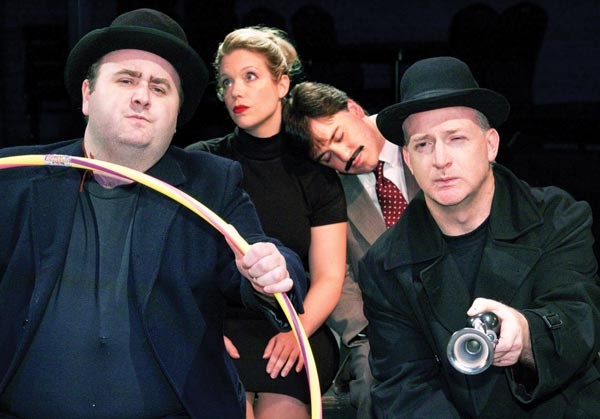 When then-young filmmaker Alfred Hitchcock used all the tools of early cinema to tell the unlikely but entertaining espionage tale of John Buchan's 1915 novel The 39 Steps, the audience of 1935 marveled at the "realistic" visions of derring-do. The modern eye can easily see the holes in Hitch's primitive special effects, and this 2005 adaptation (by Patrick Barlow, concept by Simon Corble and Nobby Dimon) pokes into and turns that "reality" on its head. The theatrical gimmicks are transparently — nay, determinedly and even victoriously — phony. And funny.

It's a project well suited to the capabilities of Little Lake Theatre Co.: a small but tightly versatile cast, and lots of stage business. It doesn't call for split-second precision, and any gaffes will generate more laughs anyway. The only problem is that the venue's theater-in-the-round blocks some audience views of some of the gags — not that there will be a shortage of them.

Much of the merriment stems from the multi-casting (squared) of Kevin Bass and Andy Coleman in more than 100 roles — good guys, bad guys, men, women, inanimate objects — with a quick switch of hat, wig, accent, whatever. Aiding and abetting them are multi-taskers Jessica Van Newkirk, and Daniel Smith and Emily Sota, portraying various critters in between fulfilling their respective duties as stage manager and properties run-crew. Jennifer Sinatra adds the sex and romance as the brunette, blonde and redhaired femmes, fatale and otherwise. The lone singleton is Gregory Caridi, dashing and daring as the hero and (mostly) straight man.

The script seems a bit slow in the first act, but director Jena Oberg keeps the pace increasing as the jokes and in-joke references to Hitchcock films grow broader and broader. (No, you don't have to be a cineaste to "get" them.) There are some heavy-duty contributions from props designer Sandy Boggs and manager Leigh Ann Frohnapfel. And props to technical director Jenny Malarky, sound designer Marcus Muzopappa and resident designer Martha Bell.

The plot is not the point. The 39 Steps is an unabashed celebration of theater, and an offbeat homage to a movie master.