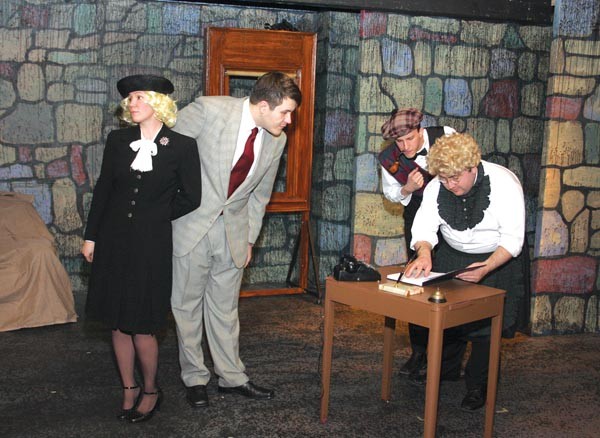 The complete cast of The 39 Steps, at McKeesport Little Theater

During its 51 seasons, McKeesport Little Theater certainly has committed itself to challenging, offbeat plays that you might not expect from a community endeavor.

Now it peoples 33 loony scenes with four actors representing so many characters that the mind reels. The production is The 39 Steps, Patrick Barlow's adaptation of Alfred Hitchcock's take on the John Buchan novel. The project doesn't sound easy, but the cast and director Mark A. Calla do it rather well.

This Monty Python-like send-up's story and dialogue stay fairly faithful to their sources. Innocent Canadian Richard Hannay gets entangled in a British spy plot. Accused of murder, he's on the run while trying to uncover that plot on Scottish soil, getting into multiple scrapes with sinister men, appealing women and innocent denizens; i.e., it's action-based.

Many funny moments get their due, including a windy chase on top of a moving train, driving a car along a bumpy rural road and Hannay dealing with an uncooperative corpse. Other delights come from watching two men ("Clown #1" and "Clown #2") shift non-stop into and out of roles and costumes, sometimes within a few seconds. Andy Coleman's straight-faced performances feel just right, especially when a dour Scot gives a hilarious blessing before a frugal supper. TJ Firneno, as the other clown, carries off his roles capably; so does Samantha Mitchell, portraying three women. Sean David Butler, as Hannay, puts considerable energy into every scene, though he rarely suggests an unflappable reserve which could be funnier and more consistent with the tone of the film this play spoofs.

This farrago, often called a farce, is usually described as "fast-paced." Calla hasn't achieved that pace. Sometimes he drags things out by having stagehands appear between scenes to arrange furniture and props, instead of adding to the presumed frenzy by having the actors do that. He also milks some visual effects until the cows come home. And Butler and Mitchell strive too earnestly for maximum meaning of simple dialogue, instead of just pushing on.

Still, it all looks as if Calla and his actors have heaps of fun. And, clearly, last Saturday night's audience did, too.