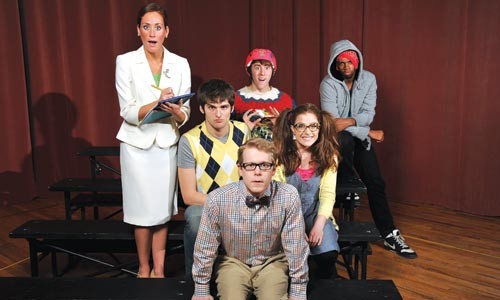 Blame it on my OCD, but when I see a show I like, I always want to see it several more times to understand why it "works." Which is why this Carnegie Mellon University production of the musical The 25th Annual Putnam County Spelling Bee is the third I've seen in the past year.

I really do enjoy this sweet, funny story of six kids competing for a bee title and three adult officials along for the ride. It's not too surprising to learn that the show was developed by improv comedians: There's very little in the way of plot here; the story meanders and the resolution is never in doubt. Moreover, the characters are loaded with so many (at times arbitrary) quirks you sometimes feel like you're watching a catalogue of behaviors rather than rounded individuals.

But that's not much of a flaw, because what Putnam County really has going for it is nonstop laughter. Book-writer Rachel Sheinkin doesn't miss a single comedic moment in a story conceived by Rebecca Feldman and Jay Reiss. And composer/lyricist William Finn supplies a score which, thanks to his usual embracing humanity, keeps the evening from dissolving into camp. This is a big-hearted show which manages to be sentimental but never saccharine.

This CMU production, directed by Joe Deer with musical direction by Thomas W. Douglas, is about as bright and colorful as any I've seen. John Zuiker's set design is bold and cartoony, a look mirrored by Rachel S. Parent's costumes.

And that cartoonishness finds its way into the playing style as well, which is both a good and a not-so-good thing. Under Deer's direction, this exuberant cast telegraphs much of the play's emotion; the happy moments are expressed with swelled chests and abandoned glee, while the serious beats are thuddingly sincere and affectless. Perhaps the show needs time to ripen so the toggling between these two extremes isn't so jarring.

When the director and his company allow the material to do the work it was designed to do, the results on stage are wonderfully fresh and funny.