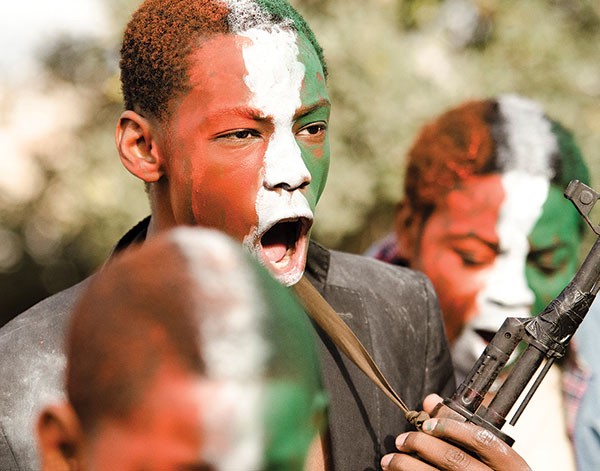 Tiny warriors: the child soldiers of "That Wasn't Me"
In English, and various languages, with subtitles.

In this year's slate of Oscar-nominated Live Action Shorts, two comedies bring some levity to a program dominated by heavier subject matter. Selma Vilhunen's "Do I Have to Take Care of Everything?" (Finland, 7 min.) portrays the universal comedy of getting a chaotic family ready for a wedding. Circumstances are decidedly odder in "The Voorman Problem" (U.K., 13 min.): Mark Gill's film follows a psychiatrist (Martin Freeman) into a prison where he examines a man claiming to be God.

The sentimental "Helium" (Denmark, 23 min.) is sad but heartwarming. A janitor at a hospital captivates a terminally ill boy with tales of Helium, a fantastical after-life that is superior to "boring" Heaven. The words are evocative, but director Ander Walter does a superb job of bringing Helium to life through CGI visuals.

Troubled children of a different sort appear in Esteban Crespo's "That Wasn't Me" (Spain, 24 min.), in which Spanish doctors traveling in an unidentified African nation are kidnapped by child soldiers. Things go badly, but out of the horror comes some hard-earned redemption.

In "Just Before Losing Everything" (France, 30 min.), a woman and her children are imperiled by her gun-toting husband, and can't even find sanctuary at the shopping mall — or can they? In this small-scale thriller, director Xavier Legrand builds plenty of fraught tension out of mundane domestic details such as colorful work shirts and crowded parking lots.