More than a dozen films screen through April 9 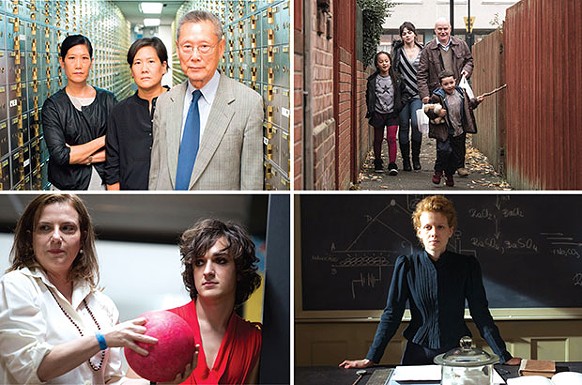 Clockwise from top left: Abacus: Small Enough to Jail; I, Daniel Blake; Marie Curie: The Courage of Knowledge; and Don’t Call Me Son

The Carnegie Mellon International Film Festival: Faces of Identity runs Thu., March 23, through April 9, with more than a dozen feature films and documentaries. Unless noted, films screen at McConomy Auditorium, on the CMU campus, and are $10 ($5 students/seniors). A complete schedule, including guest speakers and specials events, is at www.cmu.edu/faces. Some recent films screening this week:

I, DANIEL BLAKE. The Kafka-like bureaucracy of the welfare state complicates life for two well-intended but struggling working-class folk in Ken Loach’s new film (penned by his frequent collaborator Paul Lafferty). Recovering from a heart attack, carpenter Daniel (Dave Johns) is caught between medical disability and employment. Partly to stay busy, he takes a young single mother (Hayley Squires) under his wing. The film is heartbreaking, heartwarming and infuriating, though not without humor. There’s no pat solution here, but Daniel has one Pyrrhic victory worth a cheer. 7 p.m. Thu., March 23. Tickets are $15 ($10 for students and seniors), and include an opening-night reception.

ABACUS: SMALL ENOUGH TO JAIL. The family-run Abacus Federal Savings in New York City, which catered to Chinatown’s immigrant community, was the only U.S. bank to face charges of mortgage fraud in the wake of the 2008 financial crisis. Steve James’ documentary follows the Sung family — Thomas Sung, who founded the bank, his wife, and their four daughters, some of whom work at the bank — over the course of the five-year ordeal and trial. It’s a remarkable case study, not least in how tiny Abacus’ alleged fraud was compared to the giants of Wall Street. And at the film’s heart is one steadfast immigrant who, having achieved the American dream, sought to help others secure theirs. Director James attends a Q&A. 7 p.m. Sat., March 25

MARIE CURIE: THE COURAGE OF KNOWLEDGE. Marie Noelle’s bio-drama looks at some of the remarkable life of Marie Skłodowska Curie, the Polish-born, Paris-based scientist who made significant discoveries in radioactive materials and its uses. Noelle’s film dabbles in the scientific, but its chief focus is in depicting the complete being of Curie, portrayed here by the steady but somewhat ethereal Karolina Gruszka. Curie was a scientist, research collaborator, mother (and single mother), lover and pioneer in a time and a field that did not welcome women. It is the sort of film that manages to incorporate languid baths and a duel (!) alongside obtuse conversations with Einstein and an overt feminist message. In French, with subtitles. 3 p.m. Sun., March 26

DON’T CALL ME SON. In Anna Muylaert’s Brazilian drama, a teenage boy named Pierre (Naomi Nero) is already struggling with who he is; locked in the bathroom, he photographs himself wearing women’s clothing. Then his identity gets truly upended, when it’s discovered he was abducted as a baby, and that now he must live with his biological family. The film is relatively restrained while exploring such melodramatic topics, allowing the various tensions and anxieties to play out in low-key, seemingly mundane scenes, such as meal times within the various families. In Portuguese, in subtitles. 7 p.m. Wed., March 29

Miller Institute for Contemporary Art explores bounds of tech and humanity with Paradox: The Body in the Age of AI