In English, and various language, with subtitles

"Nobody has meant more to me in my life than my cat, Molotov," says Allan, a very old Swedish man, in the opening scene of The 100-Year-Old Man Who Climbed Out a Window and Disappeared. Who would name a sweet-looking orange-and-white cat after an explosive device? Perhaps a man, like Allan, whose eventful life has been shaped at all turns by his love of blowing things up.

And sure enough, after exploding the fox that killed his cat, Allan finds himself sent to a nursing home. But on his 100th birthday — while nurses struggled to stick that many candles in a cake — Allan simply climbs out of the window and buys a bus ticket.

Felix Herngren's comedy is adapted from the best-selling novel by Jonas Jonasson, and the film was a blockbuster hit in its native Sweden. It's a hybrid piece, combining an absurd fabulism with farce, a crime caper and a darkly comic reflection on the importance of enjoying life to the fullest. At its center is Allan (Robert Gustafsson), a man of some intelligence and brio, who nonetheless remains rather child-like and oblivious to the drama and destruction around him.

The contemporary scenes are intercut with flashbacks depicting how Allan's love of blowing things up led him to be present at significant 20th-century events that required explosives, including the Spanish Civil War and the Manhattan Project. (On seeing the Berlin Wall dismantled, Allan expresses regret that it couldn't have been blown up.) Allan hobnobs with leaders as disparate as Franco and Ronald Reagan, and develops a sideline in espionage.

Meanwhile, back at the bus station, a thuggish biker barks at him to watch his suitcase. But when Allan's bus arrives, he gets on, suitcase and all. Disembarking in a backwater, Allan is taken in by another older fellow, Julius (Iwar Wiklander). After a night of boozy camaraderie, during which they fend off an attack by the biker pursuing his suitcase, the pair opens the luggage; it's packed with cash. Thus, the pair begins a new adventure, which includes dodging gangsters, disposing of bodies and finding a new home for an elephant. 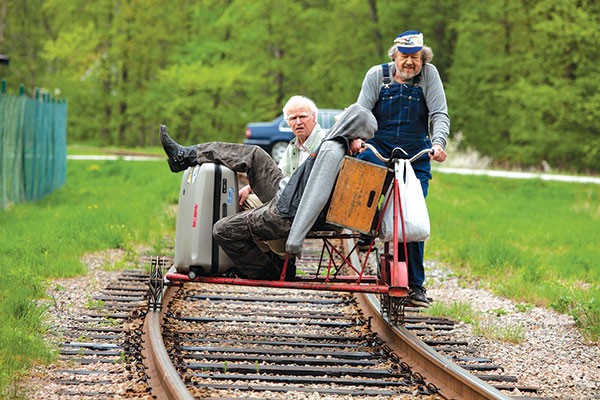 The guileless-man-ambling-through-history will recall an earlier hit, 1994's Forrest Gump, but Herngren's film is less sentimental, and the humor is much darker. (Prepare for blithely considered decapitations.) There's also some subtle commentary about the cost of remaining neutral about the chaos one causes, even as one benefits from it — whether one is an old man or a nation. Sweden, you may recall, is the ancestral home of dynamite, Allan's favorite explosive.