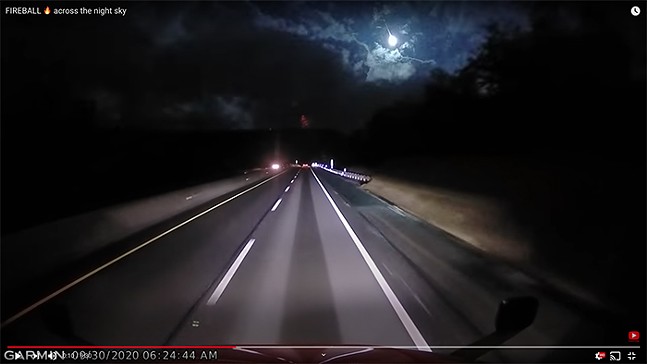 Courtesy of Trucker Beetle Bailey on YouTube
A meteor falling over Pittsburgh
Early risers in the Pittsburgh area may have noticed a bright ball of fire shooting across the sky around 6:30 a.m. on Sept. 30. Some thought it was a huge shooting star or a UFO, but it was actually an unexpected flaming meteor.

According to Mike Hennessy, manager of the Buhl Planetarium at the Carnegie Science Center, scientists can't say definitively where the meteor came from, it's possible it was part of the Southern Taurids meteor shower (as in the constellation Taurus). The Taurids shower occurs from Sep.-Nov., and originates from the comet Encke.

Because of their timing in the fall, Hennessy says these meteors are sometimes called "Halloween fireballs."
"Whenever earth is orbiting the sun and we pass through the debris field, kind of the breadcrumb trail left by that comet, some of that debris will burn up in our atmosphere," says Hennessy. "When you do see them, it's rare but you're pretty fortunate, because they're also known to be rich in fireballs."

Hennessy says it's exciting when a notable event like this occurs in the night sky because it gives people a chance to get interested in astronomy.

"It's never not exciting when something amazing is happening in the night sky," says Hennessy. "For us, any time something like this happens it's exciting because it's nature kind of drawing attention to itself and getting us to look up and see things that are bigger than ourselves."

For those who missed the fireball and are hoping to see more events in the night sky, Hennessy says to look out for the night of Oct. 2, when Mars will appear close to the moon.