The menu offers the usual Thai curries and noodle dishes, plus a lengthy selection of chef’s creations 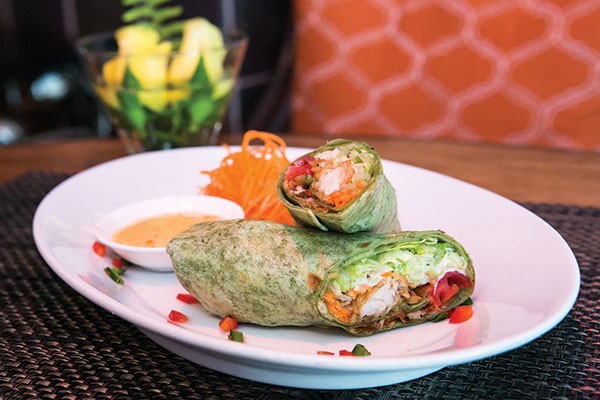 Eat out long enough in any city, and you’ll inevitably return to certain spaces in new guises, layering memories of meals like phyllo dough. This week, we revisited one of our favorite dining settings, a storefront in a little Craftsman commercial building set amongst the gracious homes and apartment houses of Bellevue. Like a solitaire stone in a ring, it is located at a bend in the road just before Lincoln Avenue crosses the Pittsburgh line to become California Avenue.

It has a pretty little patio out front and an intimate dining room within that is furnished with substantial pieces, such as wooden benches and upholstered armchairs that communicate comfort and impart a bohemian coffeehouse feel.

The current occupant, Thai Tamarind, has added a few subtle Southeast Asian touches, such as a painting of a Bodhisattva and a very fetching mermaid, that wouldn’t look out of place in the living room of a well-traveled professor.

On the menu are all of the usual Thai curries and noodle dishes, plus a list of stir-fry entrees that seem to float between Thailand and China and a lengthy selection of chef’s creations. This was eclectic and far-ranging, including Japanese dishes and such distinctive items as “hurricane scallops” (grilled, served with vegetables and green curry sauce) and “amazing eggplant” (fried, with peanut sauce and steamed broccoli).

We found moments of variety in the rest of the menu as well, like the autumn roll alongside its more familiar spring and summer siblings. Intriguingly filled with avocado and mango, this was — alas — unavailable the night we dined. The server imparted that the mangoes weren’t ripe enough, a report we greatly preferred to being served subpar fruit.

Instead, we started with two forms of dumplings and fried tofu. Pork pot-stickers were available steamed, fried or pan-fried; we chose the latter and were rewarded with classic dumplings that were tender above, crisp below. Jason’s were filled with gingery pork whose looseness was perfect for absorbing sauce, but those that Angelique sampled had a firmer filling that she found greasy and bland. The shumai-like dumplings were filled with a mixture of pork, shrimp and mushroom that neither of us found especially flavorful, though they had a pleasingly plump, juicy texture.

A third form of dumpling came in the won ton soup. Like the shumai, which resembled rather than reproduced dim sum dumplings, this too echoed its Chinese antecedent. The soup’s broth was more herbal than the bright, golden original, and bean sprouts and shredded cabbage were surprising components, their crispness lending the soup a welcome texture.

“A-Ge tofu,” more familiar to us from Japanese menus, was well executed in this Thai kitchen. Large, puffy wedges of tempura-ed tofu were fluffy inside and delicately crispy outside, topped with salty-sweet, brothy tempura sauce and zingy scallions for flavor.

The flavor of chicken satay can vary, from well-grilled, almost bitter char to sweet glazes to nearly bare chicken-on-a-stick. But, if you’re dipping it in thick, peanutty-sweet sauce anyway, isn’t the texture the most important thing? Thai Tamarind seems to think so, serving up lightly-browned white meat that was as juicy and satisfying as any dark meat could be. The sauce was sweet without cloying, making the whole dish a success.

Moving on to the curries, we sampled three: green, Panang and Massaman. The former was mild and creamy, more herbal than spicy, and lacking the lemon-pepper notes that we think of as the hallmark of this dish. Panang curry was sweeter than we like, needing more savor and spice for balance. But only Massaman curry inspired strong feelings at our table: Our son, an aficionado of this particular curry, pronounced it the best he’d ever had, while others in our party found it excessively salty.

Thai Tamarind Noodle, a variation on pad Thai made with bean thread, also lacked balance. A great pad Thai relies upon perfect balance of spicy, salty, tangy and sweet, and any time one flavor comes too far forward, the dish falls short; this was the case here, with the flavor profile tending too sweet.

Again and again, Thai Tamarind brought us exceptional textures. But rarely were they in service of the balanced yet bold flavors we craved.

New Commutes: Analyzing the changing ways Pittsburghers get to work