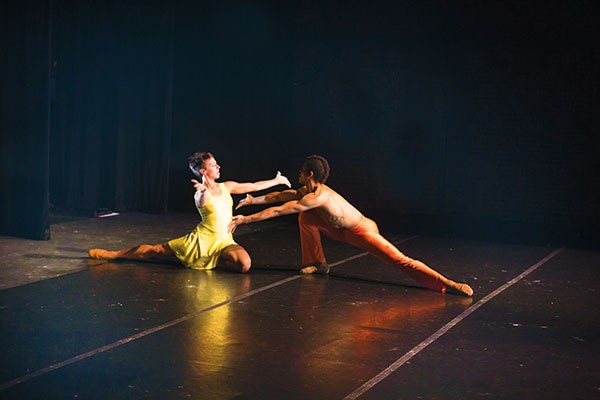 The title of Texture Contemporary Ballet's latest program, Perpetual Motion, also aptly describes the company itself. Led by directors Alan Obuzor and Kelsey Bartman, Texture has seemingly been moving nonstop since its founding two summers ago.

The troupe, named one of Dance Magazine's "25 to Watch" in 2013, has taught workshops and performed frequently throughout the area, most recently at last month's PrideFest. Later this summer, it heads to New York's prestigious Jacob's Pillow Dance Festival (as part of the festival's Inside/Out series), and also to Chicago.

Perpetual Motion runs July 18-21, at the New Hazlett Theater. As in past Texture productions, the new show features a large ensemble of 21 dancers, including guest dancers from Sacramento Ballet, Ballet Quad Cities, Colorado Ballet and BalletMet. Also as in the past, the production showcases in-house choreography by Obuzor and Bartman.

For Perpetual Motion, BalletMet Columbus dancer Gabriel Gaffney Smith joins the choreographic mix. Smith has been a regular performer with Texture and has composed original music for several of its ballets.

Smith teams with Obuzor for the program's first ballet, "Broken Mirror." Set to New Age music by Smith, the 16-minute piece for five men and 12 women in four parts is themed around people on the move.

Next, Smith and Bartman come together for two ballets. In the first, as both choreographers and performers, they present a five-minute pas de deux entitled "Wash," set to a song of the same name by indie folk band Bon Iver. "It is a crazy emotional journey about negative relationships," says Bartman of the ballet. The two then take an equally emotional trip down memory lane for "Mulberry Way," a 20-minute ballet they perform with 12 other dancers set to music by British band Elbow.

Rounding out the program is "MOIP," named for local rock band Meeting of Important People, whose music provides the soundtrack. The 35-minute ballet is choreographed by Bartman, Obuzor and Smith and features the entire cast. The ballet, says Obuzor, is inspired by the lyrical and emotional content of these dozen songs by MOIP, which the band will perform live at each of the four performances.