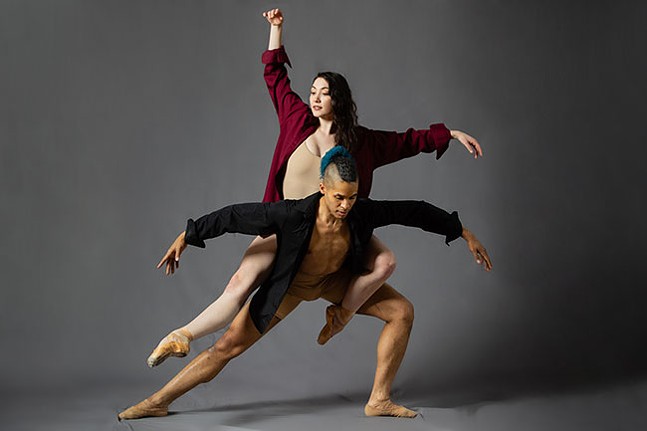 Texture’s contemporary style is highlighted by the musical selections for Flying & Falling, which in addition to modern pop include classical pieces, intense scores, and more. The opening number, “The Beauty of Flight,” features music from orchestral pop group The Piano Guys, who create mashups like combining Beethoven’s “Symphony No. 5” with “Secrets” by One Republic.

“A while ago, [Bartman and I] decided that we should choreograph to their music – it’s so rich and full and captivating, and so we’re taking this opportunity to do that now,” says Obuzor. “For this piece, we kind of just used the music as a jumping off point.”

In the second act, Obuzor choreographed his piece “Reshifting Time” to the music of Two Steps From Hell, a company that produces songs for movie trailers and TV shows, specializing in an intense sound that builds with fervor. Obuzor, who originally choreographed the piece on commission for Madonna University, chose the music specifically for its feel, which he describes as “powerful and dynamic and epic-feeling.”

The dance doesn’t have an explicit narrative but does involve a solo dancer getting pulled into and pushed away from a larger group. “[It’s] a little bit along the lines of those things in life that latch you and push at you, and you make those decisions of what you wanna give into or succumb to or stand against,” he says.

The show closes with the third act, featuring a 35-minute piece choreographed by Bartman and Kendall. The piece, aptly titled “Hats Off to the Greats,” is a tribute to iconic mid-century film music, including that of Judy Garland, Frank Sinatra, the cast of Singing in the Rain, and more. The number originated from Texture WIP (Works in Progress) Choreography Project, which features shorter performances on a smaller stage. Bartman and Kendall expanded the piece from its original 10-minute length.

The rest of Texture’s upcoming season includes Beatles & Bach in September, a show that, of course, features ballet set to the music of both Bach and The Beatles. A highlight of Beatles & Bach is the symphonic rock group Cello Fury, who will play an original composition along with selections from the titular musicians. The season will also feature works from the WIP Choreography Project in November and a show titled Personal & Powerful in March 2020.

Papa depicts “memories, fantasies, and heartaches” of one Asian-American family