Starting a new relationship can be exciting, but confusing as well. Is she or he the right one for you? You agree on things like paying for college and the war in Iraq -- but what about No Child Left Behind?

If you still can't give your heart to the Democrats battling it out for the party's nomination, City Paper's Presidential Passion Quiz may be just the thing for you. Not only will it tell you whom you really support, but it will allow you to gauge the depth of that support ... so that you can start preparing for any crushing disappointments that lay in your future.

To take the test, answer the questions in each section below, and then score your answers by comparing them to each of the Democrats in the race, Senators Hillary Clinton and Barack Obama.

SECTION I: The Issues

Values matter -- even to family-hating Democrats. In the section below, select the position that best matches your philosophies on the following issues.

A. Place a 90-day moratorium on foreclosures; freeze adjustable-rate mortgages for five years until homeowners can refinance loans at affordable costs.

B. Create a "universal mortgage credit" to provide an average of $500 to homeowners annually in mortgage aid. Prosecute subprime lenders who engage in mortgage fraud; create a fund to help people refinance their mortgages and provide comprehensive supports to homeowners funded partially by increased penalties on lenders who commit fraud; eliminate the provision that prevents bankruptcy courts from modifying an individual's mortgage payments.

A. Cover all Americans by making insurance mandatory and providing coverage through Medicare or by allowing individuals to keep their existing coverage. Reduce costs by stressing prevention and focusing on efficiency and modernization. Provide a tax credit to help pay for coverage. End discrimination based on pre-existing conditions

B. Coverage is not mandatory, except for children. However, health care will be made available to all Americans, who can't be turned down for any reason. Provide tax credits for those who need help to pay for insurance. Require employers that don't offer health care to employees to pay into the national system.

B. Illegal immigrants should be given a path to citizenship that includes paying a fine and learning English. Deport immigrants who commit crimes, and establish sanctions for employers who hire undocumented aliens. Work with Mexico to find solutions to help it employ its own citizens.

A. Draw up a plan for troop withdrawal in the first 60 days of presidency; support the appointment of a high-level U.N. representative to help broker peace among the parties in Iraq. Organize a multibillion-dollar international effort to address the needs of Iraqi refugees.

B. Begin immediate withdrawal of troops from Iraq, assuming the best way to get Iraqis to take responsibility for their future is to make it clear that we are leaving. Remove one or two combat brigades per month, completing the pull-out in 16 months; no building of permanent bases in Iraq. Provide at least $2 billion to expand services to Iraqi refugees in neighboring countries.

A. Support direct diplomacy with Iran without preconditions, and meetings with leaders of all nations, whether friend or foe. Double amount of money spent fighting global poverty; extend talks in Asia beyond bilateral agreements and beyond direct talk only with allies. Stop production of new nuclear weapons; work to decrease the U.S. and Russian stockpiles of nuclear weapons; focus military on the war in Afghanistan.

B. Work toward a Palestinian state and declaration by insisting that Palestine recognize Israel's right to exist. Develop a comprehensive strategy focusing on education, intelligence and law enforcement to counter terrorists and their financial backers. Offer incentives to Iran to halt nuclear-weapons program, but use force if necessary. Reduce U.S. and Russian nuclear arsenals. Provide $10 billion over five years to build schools abroad.

B. End No Child Left Behind outright, and double the number of children in after-school programs. Invest $100 million in public/private internships for students; create a $3,500 tax credit for parents of college students; invest $500 million in community colleges. Increase AmeriCorps scholarship to $10,000 annually; increase the maximum Pell Grant; waive student-loan debt for graduates who work in public service.

SCORING: Put 1 point in the "Clinton" column for each of the following answers:

Put 1 point in the "Obama" column for each of the following answers you gave:

What a person believes is only half the story. The real question is: How does she or he act? How will they treat you? On the questions below, choose the behaviors you think would be easiest to live with.

1. Which legislative action bothers you more?

2. Which embellishment of the truth concerns you more?

A. Falsely claiming to have been shot at by snipers during a visit to Bosnia in 1996

B. Claiming you haven't taken contributions from oil companies, while accepting some $213,000 from people who work for the fossil-fuels industry

4. Although all candidates originally agreed not to campaign or count delegates received in Michigan and Florida, counting the votes now:

6. What is more important for Americans?

7. Which is more beneficial?

A. Getting money from Richard Mellon Scaife's ex-wife.

B. Having Richard Mellon Scaife tout your "political and personal courage."

8. Which is more crucial to winning the presidency?

9. Which Senate vote is more harmful?

A. Voting against energy bill that would have established an ethanol mandate for refineries.

B. Supporting an energy bill with that would double ethanol production, but also includes oil-industry incentives.

10. Paying for college can be tough, which is why the candidates offer radically different tax incentives. Which will make a drastic difference?

SCORING: Put 1 point in the "Clinton" column for each of the following answers:

Put 1 point in the "Obama" column for each of the following answers you gave:

Still having a hard time picking your match? Sometimes it helps to see who else has been attracted to a candidate. Answer the questions below about the company you'd prefer to keep.

1.) Who would you rather have lunch with?

2.) If you wanted to book a speaker on tolerance and equality, whom would you hire?

3.) Which local public official's judgment do you trust more?

4.) Which actor would you rather watch up on screen?

6.) My favorite Democratic gubernatorial candidate in 1994 was ...

7.) You want to organize your fellow employees; who are you going to call?

A. International Union of Painters and Allied Trades

8.) You're casting a new movie about the private lives and passions of Pittsburgh's political leaders. Whom do you cast as Sophie Masloff?

10.) You're stuck on a desert island, and your iPod has music by only one major recording artist. Who would you rather listen to?

Total your scores for this section. For each of the following answers you gave, put one point in the Clinton score.

Now add one point to the Obama score for each of the following answers you matched:

Total up your scores for Clinton and Obama from each of the three tests above.

Whoever scores the highest is your champion, obviously. But the real test is ... just how deep does your political passion run?

To find out, subtract the loser's point total from the winner's, and consult the following chart.

You've finally found the kind of candidate you thought existed only in history books. Good for you. Unfortunately, there's a good chance that in doing so, you've acquired one of those 1,000-yard stares we're used to seeing only from Nader supporters. Plus, studies show that if your candidate loses the party nomination, you're at an elevated risk for backing John McCain in November. It might be wise to avoid door-knocking in the weeks ahead: You may end up making things worse. But hey -- those spam e-mails aren't going to send themselves!

You have strong convictions, but are willing to demonstrate a bit of ideological flexibility. Good for you. For one thing, it means you're less likely to accuse your opponent of being a "whore," or to insinuate that he only got where he is because he's black. For another, it means that if your candidate wins in November, you'll be prepared for the compromises that will almost inevitably be made on the very issues you're so excited about today. Enjoy!

On the upside, you'll probably be reasonably content about the outcome of the April 22 primary, no matter what happens. On the downside, your contentment will likely leave you unprepared for when the right-wingers come crawling out of the woodwork a couple months from now. That's the way it's always worked before, anyway.

Less than 2 points: Somebody get Al Gore to stop this nightmare

If you find yourself in this category, there are two possibilities. One is that all the campaigning has left you feeling ambivalent about both candidates. Then again, you may have realized that, against all odds and despite all the rhetoric, Democrats have somehow managed to get two pretty decent candidates. 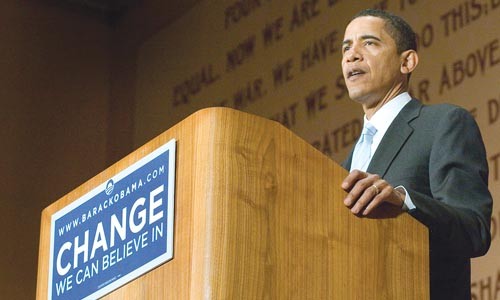